Detection of mycotoxins in corn is complex. The fungi producing the mycotoxins often do not grow uniformly in a field or across a geographic area. As a result, the detection of any mycotoxin in corn, if present, is highly dependent upon the concentration and distribution of the mycotoxin among kernels in a lot of corn, whether a truckload, a storage bin or a railcar.
The objective of the FGIS sampling process is to minimize underestimating or overestimating the true mycotoxin concentration since accurate results are imperative for corn exports. However, the objective of the 2019/2020 Harvest Report assessment of mycotoxins is only to report the frequency of occurrences of mycotoxins in the current crop, and not to report specific levels of mycotoxins in corn exports.

To report the frequency of occurrences of aflatoxin, DON and fumonisin for the 2019/2020 Harvest Report, IPG Lab performed the mycotoxin testing using FGIS protocol and approved test kits. FGIS’s protocol requires a minimum of a 908-gram (2-pound) sample from trucks to grind for aflatoxin testing, approximately a 200-gram sample to grind for DON testing and a 908-gram (2-pound) sample for fumonisin testing. For this study, a 1,000-gram laboratory sample was subdivided from the 2-kilogram survey sample of shelled kernels for the aflatoxin analysis. The 1-kilogram survey sample was ground in a Romer Model 2A mill so that 60% to 75% would pass a 20-mesh screen. From this well-mixed ground material, a 50-gram test portion was removed for each mycotoxin tested. EnviroLogix AQ 309 BG, AQ 304 BG and AQ 311 BG quantitative test kits were used for the aflatoxin, DON and fumonisin analysis, respectively. DON and fumonisin were extracted with water (5:1), while the aflatoxin was extracted with buffered water (3:1). The extracts were tested using the Envirologix QuickTox lateral flow strips, and the mycotoxins were quantified by the QuickScan system. 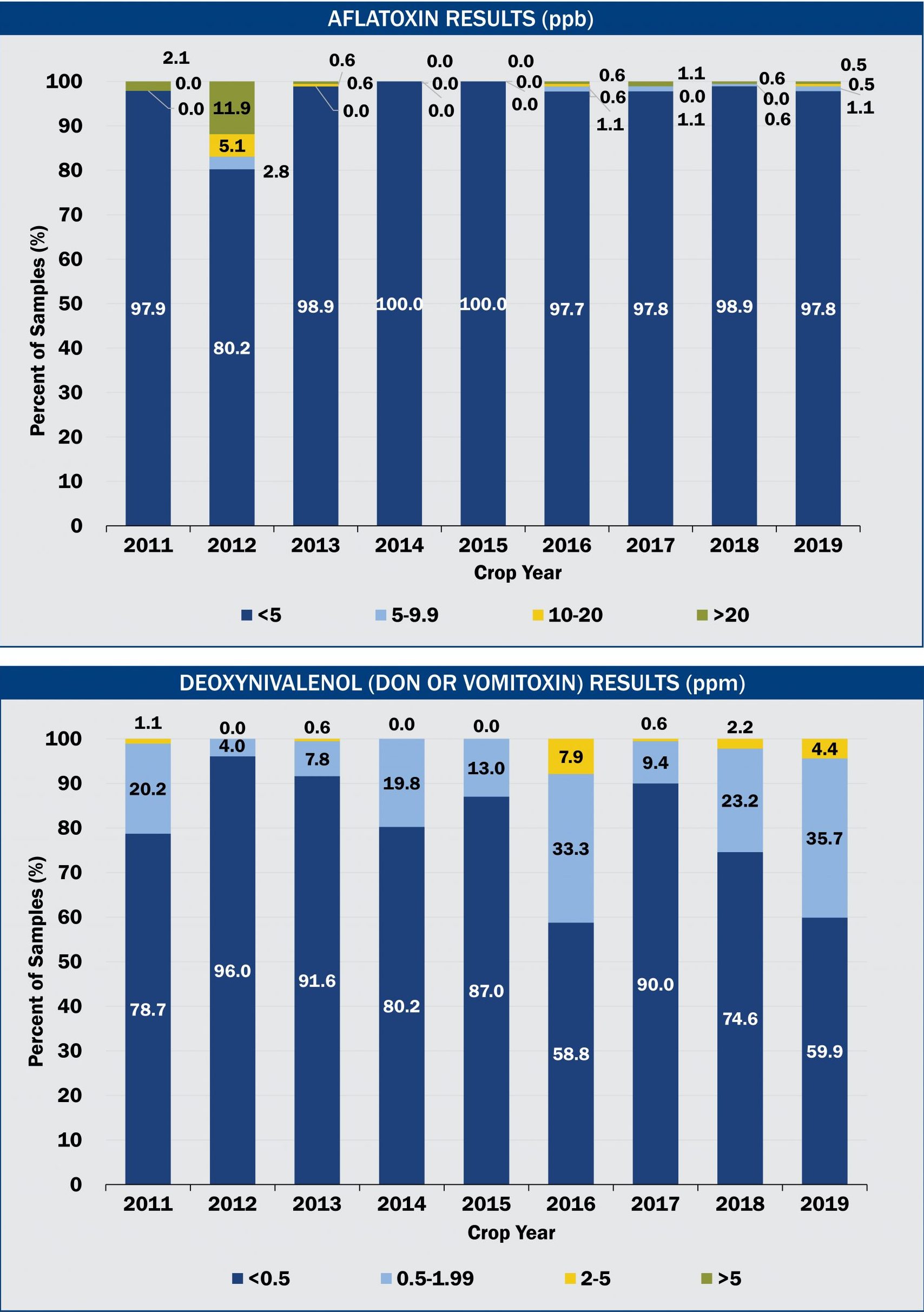