Corn grain at maturity ranges from 25 to 40% moisture. At the end of the growing season, the rate of dry-down of the grain to the ideal level of 15 to 20% moisture depends on sunshine, temperature, humidity and soil moisture. Corn can most effectively dry down with the least adverse impact on quality amid sunny, warm and dry days. One weather concern at the end of the growing season is freezing temperatures. Early freezing before the grain can sufficiently dry down may lead to lower yield, true density and test weight. Also, if harvested prematurely, higher moisture grain may be susceptible to more stress cracks and greater breakage than drier grain.

Typically, 20% of the U.S. corn crop is harvested by the start of October. However, in 2019 less than half of the crop was even mature at this time and only approximately 10% was harvested. Therefore, a greater-than-average percentage of the crop was still in the fields when rains returned in October, especially in the Gulf and Pacific Northwest ECAs, slowing harvest. While the majority of the crop was mature before typical freezing weather and snows, the cold, wet weather did not aid natural grain dry-down. Therefore, corn was harvested in the Gulf and Pacific Northwest ECAs at higher than average moisture levels, affecting both initial test weights and causing greater than average broken corn.

Fusarium-based ear mold (Gibberella ear rot) is promoted by cool and/or wet conditions soon after pollination. July 2019 was warm during pollination but was cool and wet in much of the Corn Belt at early grain development, potentially increasing Fusarium infection. The mycotoxin fumonisin that is produced by Fusarium is associated with prolonged periods of heavy rains and high relative humidity during grain-fill, along with temperatures between 10 to 30 degrees Celsius, with temperature fluctuations fostering fumonisin production. The 2019 crop did not have the necessary intra-day temperature fluctuations during grain-fill. The days and nights were both cool for early grain-fill changing to warm-hot for later stages. The mycotoxin deoxynivalenol (DON) vomitoxin that is also produced by Fusarium is often associated with harvest delay or storage of high-moisture corn. The 2019 crop had a greatly delayed harvest of relatively high-moisture corn, but the artificial drying will minimize DON accumulation.

Additionally, aflatoxin production by the Aspergillus family of molds is favored by hot temperatures, low precipitation and drought conditions followed by periods of high humidity. While it was hot throughout the corn-growing region during late grain-fill, most of the 2019 crop had ample water supply. Therefore, based on weather, aflatoxin should not be a problem this year. 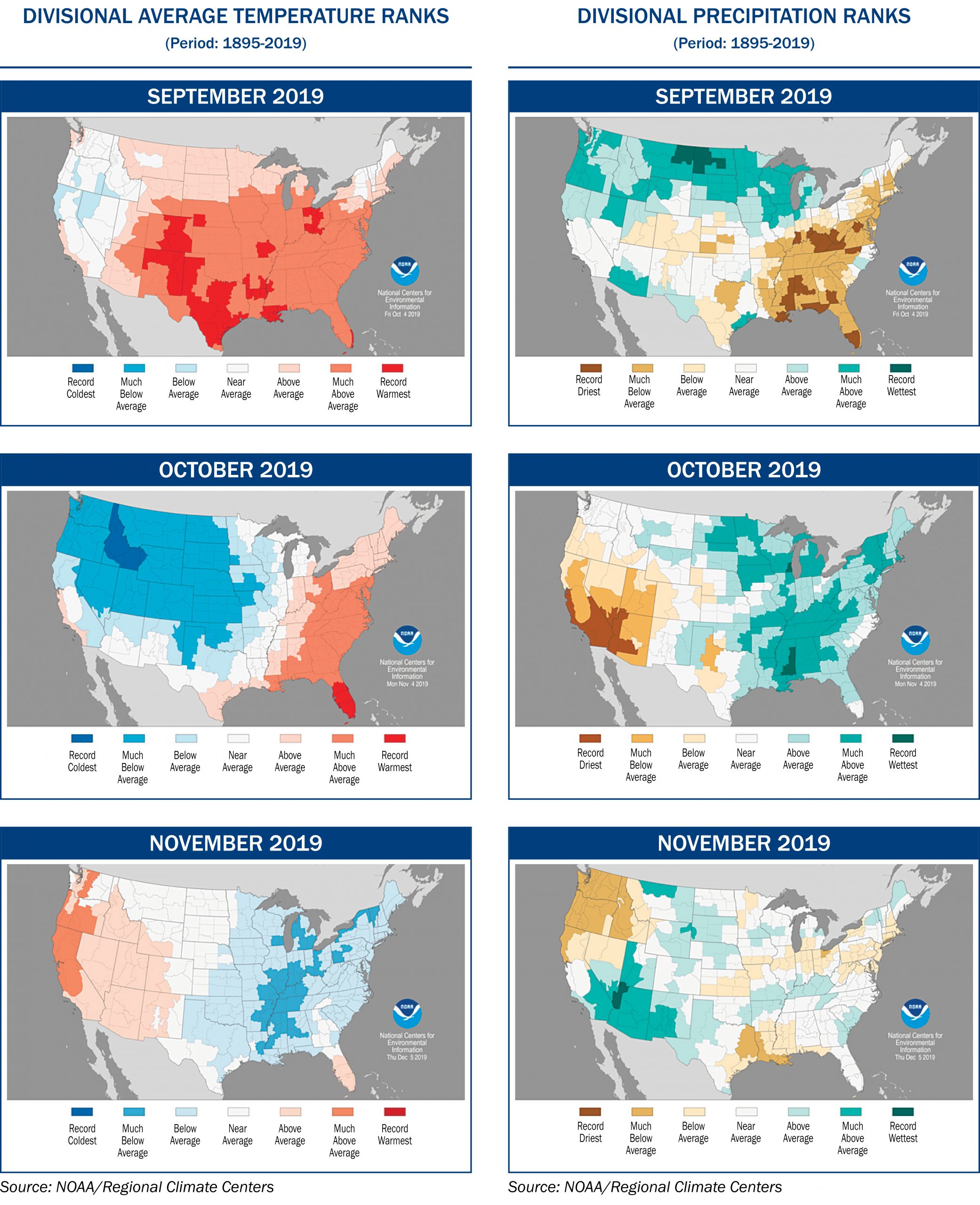