The average aggregate quality of the corn assembled for export early in the 2018/2019 marketing year was better than or equal to U.S. No. 2 on all grade factors, and average moisture content was slightly higher than 2017/2018. Chemical composition attributes indicated slightly higher starch and slightly lower protein and oil concentrations than 2017/2018. The early 2018/2019 corn exports had lower stress cracks and higher whole kernels than 2017/2018. In addition, all of the samples’ test results for aflatoxin and deoxynivalenol (DON) or vomitoxin were below the U.S. Food and Drug Administration (FDA) action and advisory levels, respectively. Notable U.S. Aggregate quality attributes of the 2018/2019 export samples include: 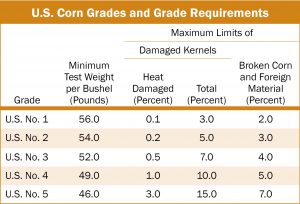