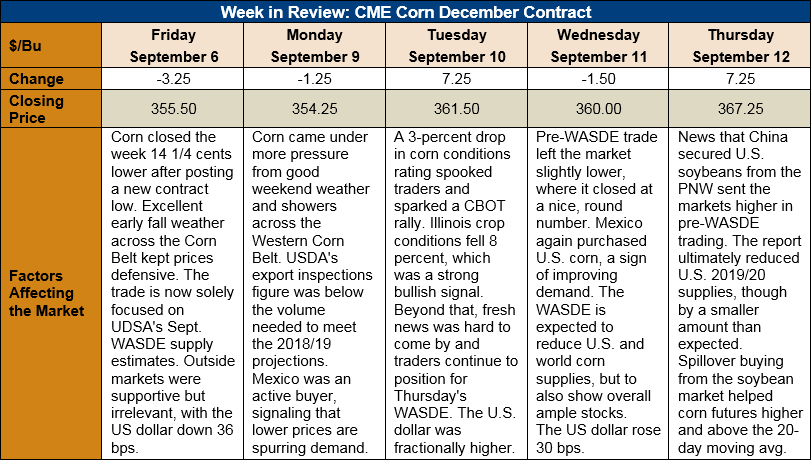 Outlook: December corn futures are 11 ¾ cents (3.3 percent) higher this week as improving demand signals outweighed what would have otherwise been a modestly bearish WASDE. USDA reduced its supply estimates for the 2019/20 U.S. corn crop, but not by as much as the trade expected. Spillover buying from soybeans and wheat helped corn higher and above key technical points. For now, it looks like corn’s seasonal lows are made, and the market could start its annual grind higher.

The highly anticipated September WASDE report was perhaps more benign than expected. USDA did not change its estimate of planted or harvested corn acres, leaving them at 90 and 82 million, respectively, despite the fact many analysts were expecting reductions. USDA trimmed its yield forecast by 1.3 bushels per acre to 168.2. That move was widely expected by the market, though again most analysts were anticipating larger reductions. In total, USDA reduced its 2019/20 U.S. production forecast 2.6 MMT (102 million bushels) to 350.01 MMT (13.8 million bushels).

On the demand side, USDA lowered its expectations of corn used in ethanol production by 0.635 MMT (25 million bushels) but made no other changes. Between that and the 0.41 MMT supply reduction, USDA’s 2019/20 corn ending stocks estimate was increased 0.229 MMT (9 million bushels). That modest change was not enough to prompt the agency to alter its farm price forecast, which still stands at $3.60/bushel.

Beyond the corn market, USDA made minor changes to the U.S. sorghum balance sheet, including a slight reduction in harvested acres and a 0.4 bushel per acre increase in yields. The reduction created a 0.203 MMT decrease in 2019/20 supplies, which created an equal reduction in ending stocks. USDA did not change its farm price forecast for the crop. In the barley market, USDA left all items on the 2019/20 U.S. balance sheet unchanged, except that it increased the farm price forecast by $0.05/bushel.

Outside the U.S., world 2019/20 corn production was reduced 3.36 MMT and world consumption was lowered as well. In total, 2019/20 ending stocks were reduced 1.45 MMT. South American balance sheets were left unchanged, except for a reduction in Brazil’s 2019/20 beginning stocks that transferred into an equal reduction in 2019/20 carry out. USDA slightly reduced its estimate of the current Ukrainian corn crop due to hot, dry weather that impacted kernel filling. USDA increased its estimates of EU production after bigger crops in France and Germany outweighed drought-related reductions in Bulgaria and Romania.

USDA’s first Export Sales report for the 2019/20 crop year saw 498,000 MT of net sales and 412,000 MT of exports, with Mexico booking the largest volumes. While still very early in the marketing year, YTD bookings are roughly half of last year’s volume. However, demand has picked up in recent weeks and the export pace could quickly meet that of 2018/19.

Cash prices are higher this week with the average price across the U.S. reaching $136.35/MT. Barge CIF NOLA values are 3 percent higher as well while FOB NOLA prices have risen 2 percent to $160.50/MT for LH September/October delivery. The recent decrease in cash prices is one reason why Mexican buyers have secured large volumes of U.S. corn this week.

From a technical standpoint, December corn seems to have formed its seasonal lows and is starting a grind higher. Improving export demand and a more favorable outlook on the geopolitical front are emboldening buyers. This week’s trade saw December futures trade above the 20-day moving average for the first time since early July, a fact that could trigger additional technical buying.