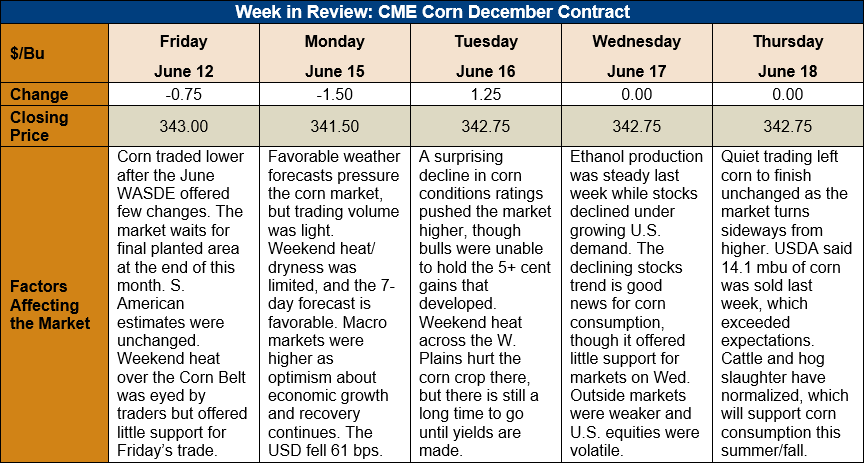 Planting for the 2020 U.S. corn crop is essentially complete, and USDA did not include that statistic in its latest report. Corn conditions turned slightly lower this week, with 71 percent of the crop rated goo/excellent – down 4 percent from the prior week. The reduction in ratings was a surprise to the market and put a bid under corn early Tuesday. That effect, however, was short-lived as crop analysts were quick to point out that early-season conditions ratings have poor correlations with final yields. The crop is far from made yet, and that brought comfort to the futures market.

The weekly Export Sales report featured net corn sales of 569,000 MT and exports of 877,000 MT. Both figures were down from the prior week but above the market’s expectation. The recent shipments put YTD exports at 31.129 MMT (down 27 percent) while YTD bookings (exports plus unshipped sales) stand at 41.490 MMT (down 14 percent). The report also featured 215,000 MT of sorghum exports. YTD sorghum exports are up 168 percent as international demand has remained exceptionally strong.

From a technical standpoint, December corn futures have turned sideways within the confines of an upward-sloping channel. The market faces major psychological resistance at $3.50, which is only few cents below the upper end of the channel. Farm sales and hedge pressure have been aggressive when the market has approached this point in recent weeks. The market is neither overbought nor oversold and trend indicators suggest the current uptrend is weak. Looking forward, these factors indicate the December futures will likely continue to move mostly sideways with rallies seeing strong selling pressure at $3.50.