Test weight (weight per volume) is a measure of bulk density and is often used as a general indicator of overall quality and as a gauge of endosperm hardness for alkaline cookers and dry millers. High test weight corn takes up less storage space than the same weight of corn with a lower test weight. Test weight is initially impacted by genetic differences in the structure of the kernel. However, it is also affected by moisture content, method of drying, physical damage to the kernel (broken kernels and scuffed surfaces), foreign material in the sample, kernel size, stress during the growing season, kernel maturity, kernel hardness and microbiological damage. Test weight is often positively correlated with true density. High test weight at the export point generally indicates high quality, a high percent of horneous (or hard) endosperm and sound, clean corn.

Broken corn and foreign material (BCFM) is an indicator of the amount of clean, sound corn available for feeding and processing. The lower the percentage of BCFM, the less foreign material and/or fewer broken kernels are in the sample. As corn moves from farm deliveries through the market channel, each impact on the grain during handling and transporting increases the amount of broken corn. As a result, the average BCFM in most shipments of corn will be higher at the export point than in deliveries from the farm to the local elevator.

The diagram below illustrates the measurement of broken corn and foreign material for the U.S. corn grades. 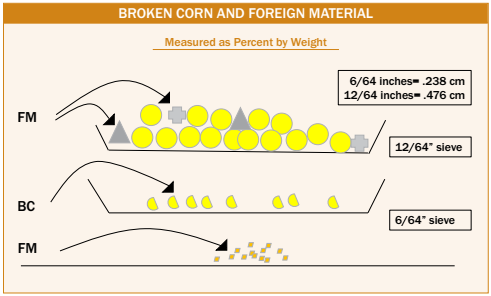 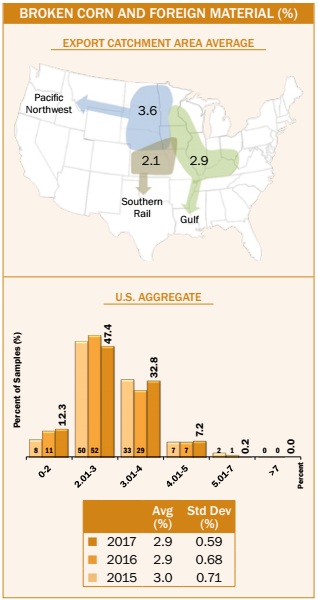 Total damage is the percentage of kernels and pieces of kernels that have visually observable damage, including damage from heat, frost, insects, sprouting, disease, weather, ground, germ and mold. Most of these types of damage result in some sort of discoloration or change in kernel texture. Damage does not include broken pieces of grain that are otherwise normal in appearance. Mold damage and the associated potential for mycotoxins is the damage factor of greatest concern. Mold damage is often associated with plant stress during the growing season or high moisture and temperature conditions during storage or transport. 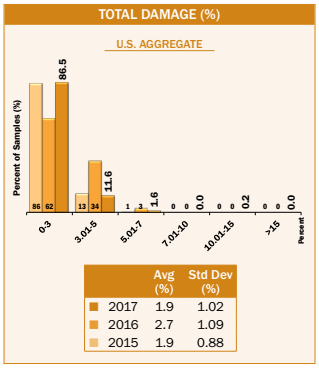 Heat damage is a subset of total damage in corn grades and has separate allowances in the U.S. grade standards. Heat damage can be caused by microbiological activity in warm, moist grain or by high heat applied during drying. Low levels of heat damage may indicate the corn has been dried and stored at moisture contents and temperatures that prevent damage in the market channel.