Corn quality information is important to foreign buyers and other industry stakeholders as they make decisions about purchase contracts and processing needs for corn for feed, food or industrial use. The U.S. Grains Council 2017/2018 Corn Export Cargo Quality Report provides accurate, unbiased information about the quality of U.S. yellow commodity corn as it is assembled for export early in the marketing year. This report provides test results for corn samples collected during the U.S. government-licensed sampling and inspection processes for U.S. corn waterborne and rail export shipments.

This Export Cargo Report is based on 430 yellow commodity corn samples collected from corn export shipments as they underwent the federal inspection and grading processes performed by the U.S. Department of Agriculture (USDA) Federal Grain Inspection Service (FGIS) or licensed inspectors at interior offices. The sample test results are reported at the U.S. aggregate level (U.S. Aggregate) and by export points associated with three general groupings, which are labeled Export Catchment Areas (ECAs). These three ECAs are identified by the three major pathways to export markets:

The sample test results are also summarized by “contract grade” categories (“U.S. No. 2 or better” and “U.S. No. 3 or better”) to illustrate the practical quality differences between these two contract specifications.

This report provides detailed information on each of the quality factors tested, including average, standard deviation and distribution, for the U.S. Aggregate and for each of the three ECAs. The “Quality Test Results” section summarizes the following quality factors:

Details about the testing analysis methods used for this report are provided in the “Testing Analysis Methods” section. 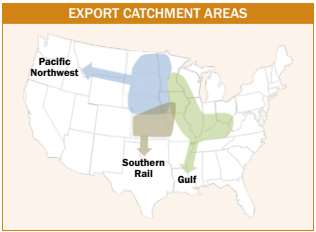 For the 2017/2018 Export Cargo Report, FGIS and interior offices collected samples during December 2017 through early March 2018 to generate statistically valid results for the U.S. Aggregate and by ECA. The objective was to obtain enough samples to estimate quality factor averages of the corn exports with a relative margin of error (Relative ME) of not more than ±10%, a reasonable target for biological data such as these factors. Details of the statistical sampling and analysis methods are presented in the “Survey and Statistical Analysis Methods” section.

This 2017/2018 Export Cargo Report is the seventh in a series of annual surveys of the quality of U.S. corn exports early in the marketing year. In addition to the Council reporting the quality of corn exports early in the current marketing year, the cumulative Export Cargo Report surveys are providing increased value to stakeholders. The seven years of data enable export buyers and other stakeholders to make year-to-year comparisons and assess patterns in corn quality based on growing, drying, handling, storage and transport conditions.

The Export Cargo Report does not predict the actual quality of any cargo or lot of corn after loading or at destination, and it is important for all participants in the value chain to understand their own contract needs and obligations. Many of the quality attributes, in addition to grade, can be specified in the buyer-seller contract. Many factors, including weather, genetics, commingling and grain drying and handling, affect quality changes in complex ways. Sample test results can vary significantly depending on the origination of the corn, the ways in which a corn lot was loaded onto a conveyance and the method of sampling used.

The companion report, the U.S. Grains Council 2017/2018 Corn Harvest Quality Report, was released in December 2017 and reported on the quality of the corn as it entered the U.S. marketing system. The 2017/2018 Harvest Report and the 2017/2018 Export Cargo Report should be studied together so that changes in corn quality occurring between harvest and export can be understood. A review of how corn quality evolves from the field to the ocean vessel or railcar is provided in the “U.S. Corn Export System” section.