Though the name suggests some inverse relationship between whole kernels and broken corn and foreign material (BCFM), the whole kernels test conveys different information than the broken corn portion of the BCFM test. Broken corn is defined solely by the size of the material. Whole kernels, as the name implies, is the percent of fully intact kernels in the sample with no pericarp damage or kernel pieces chipped away. Some companies pay contracted premiums for corn delivered with low levels of “cracks and brokens,” meaning high percentages of whole kernels with fully intact pericarps.

The exterior integrity of the corn kernel is very important for two key reasons. First, it affects water absorption for alkaline cooking and steeping operations. Kernel nicks or pericarp cracks allow water to enter the kernel faster than fully intact or whole kernels. Too much water uptake during cooking can result in loss of solubles, non-uniform cooking, expensive shutdown time and/or products that do not meet specifications.

Second, intact whole kernels are less susceptible to storage molds and breakage during handling. While hard endosperm corn lends itself to preservation of more whole kernels than soft corn, the primary factor in delivering whole kernels is harvesting and handling. This begins with proper combine adjustment, followed by minimizing the severity of kernel impacts due to conveyors and the number of handlings required from the farm field to the end user. Each subsequent handling will generate additional breakage. Amounts of breakage increase exponentially as moisture decreases, as drop heights increase and/or a kernel’s velocity at impact increases.[1] 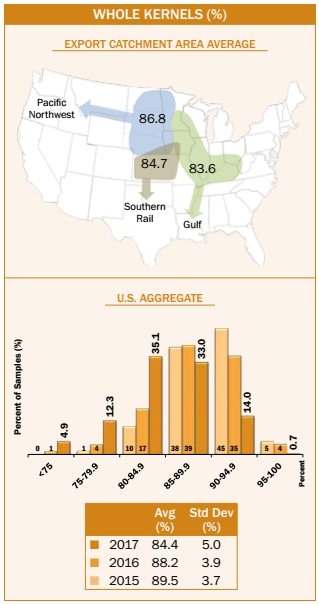