Kernel true density is calculated as the weight of a 100-kernel sample divided by the volume, or displacement, of those 100 kernels and is reported as grams per cubic centimeter (g/cm3). True density is a relative indicator of kernel hardness, which is useful for alkaline processors and dry millers. True density may be affected by the genetics of the corn hybrid and the growing environment. Corn with higher density is typically less susceptible to breakage in handling than lower density corn, but is also more at risk for the development of stress cracks if high-temperature drying is employed. True densities above 1.30 g/cm3 indicate very hard corn, which is typically desirable for dry milling and alkaline processing. Corn with true densities near the 1.275 g/cm3 level and below tend to be softer, but process well for wet milling and feed use. 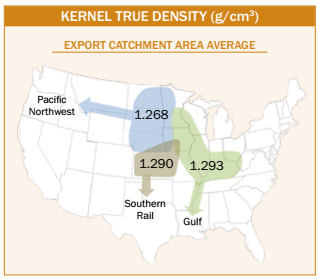