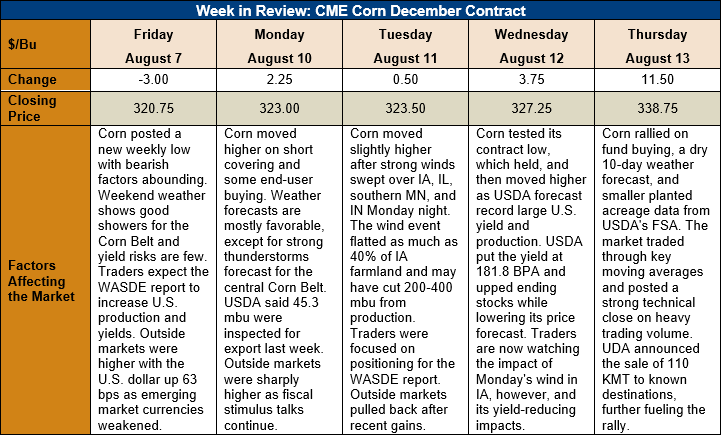 Internationally, USDA increased world corn production for 2020/21 by 7.8 MMT to 1,171 MMT and increased ending stocks for the same marketing year by 2.4 MMT to 317.4 MMT. The world ending stocks-to-use ratio is now estimated at 23.6 percent, down from 24.1 percent in 2019/20.  Other notable international changes in the WASDE were the 0.5-MMT upward revision in Ukraine’s corn production and the 2-MMT increase to the EU corn import forecast (now pegged at 25 MMT).

While the WASDE confirmed large U.S. production and supplies, there are factors suggesting future estimates may decline. The first is the “derecho” weather event that brought 100 MPH winds to parts of Iowa, Minnesota, Illinois, and Indiana. The wind flattened corn fields and some estimates suggest nearly 40 percent of Iowa farmland was affected. The event was not factored into USDA’s August WASDE as it occurred after the survey period ended. Private firms estimate the wind may have lowered U.S. corn production by 5-10 MMT (200-400 million bushels). The impacts of this weather event will be included in the September WASDE.

Another bullish factor is the release of planting and prevent planting data from USDA Farm Service Agency (FSA). The USDA FSA announced that 3.63 million hectares (8.99 million acres) were enrolled in the agency’s Prevent Plant option. The FSA estimated that 81.1 million acres were planted to corn this year, below expectations. The new data suggest USDA is likely to lower its estimate of U.S. corn planted area in the September or October WASDE. USDA creates its acreage estimate based on factors including but limited to the FSA data, so just how much area could be cut remains unclear.

From a technical standpoint, December futures posted a strongly bullish rally after the August WASDE. The market’s initial reaction was to selloff to the contract low ($3.20), where it found solid support and aggressive commercial buying and short covering. The market posted a strong technical close on Wednesday that, when combined with the FSA data, created a sharp move higher on Thursday. Thursday’s rally broke above the 100-day MA – a bullish signal – but could not sustain a close above that point. The next upside target is an open chart gap at $3.43 ¾ and then psychological resistance at $3.50 above that.