Physical factors are other quality attributes that are neither grade factors nor chemical composition. Physical factors include stress cracks, kernel weight, kernel volume, true density, percent whole kernels and percent horneous (hard) endosperm. Tests for these physical factors provide additional information about the processing characteristics of corn for various uses, as well as corn’s storability and potential for breakage in handling. These quality attributes are influenced by the physical composition of the corn kernel, which is in turn affected by genetics and growing and handling conditions. Corn kernels are made up of four parts: the germ or embryo, the tip cap, the pericarp or outer covering and the endosperm. The endosperm represents about 82% of the kernel and consists of soft (also referred to as floury or opaque) endosperm and of horneous (also called hard or vitreous) endosperm, as shown above. The endosperm contains primarily starch and protein; the germ contains oil and some protein, and the pericarp and tip cap are mostly fiber. 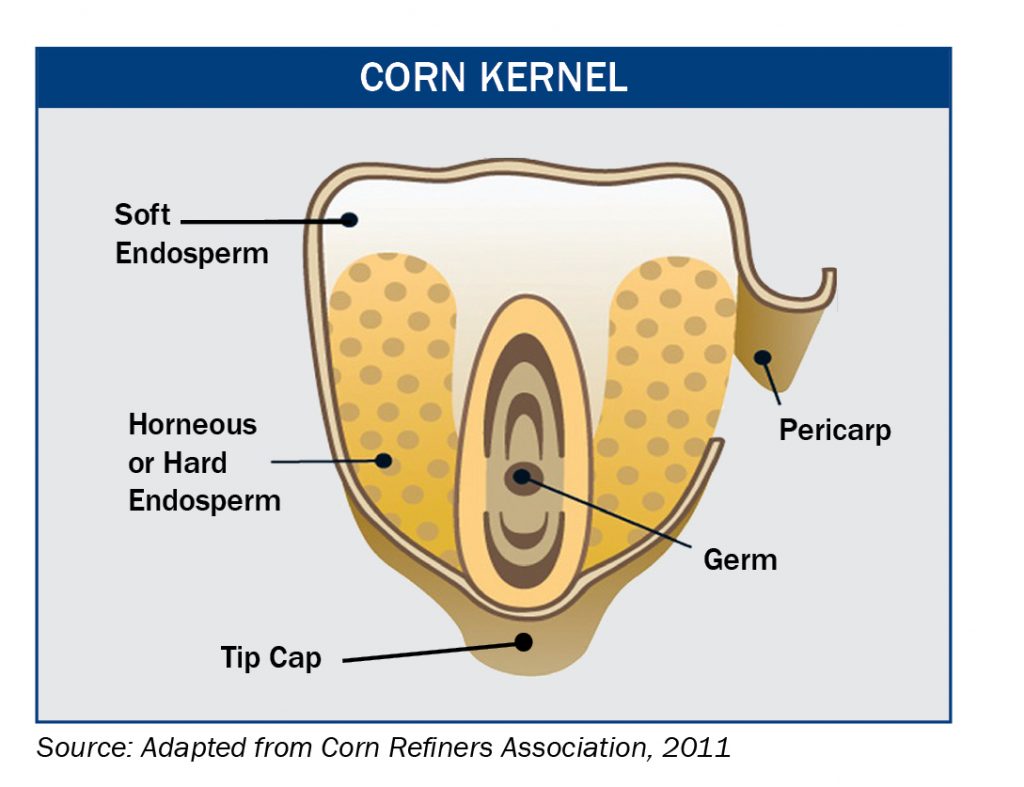 Stress cracks are internal fissures in the horneous (hard) endosperm of a corn kernel. The pericarp (or outer covering) of a stress-cracked kernel is typically not damaged, so the kernel may appear unaffected at first glance, even if stress cracks are present.

Growing conditions will affect crop maturity, timeliness of harvest and the need for artificial drying, which will influence the degree of stress cracking found from region to region. For example, late maturity or late harvest caused by weather-related factors, such as rain-delayed planting or cool temperatures, may increase the need for artificial drying, thus potentially increasing the occurrence of stress cracks. 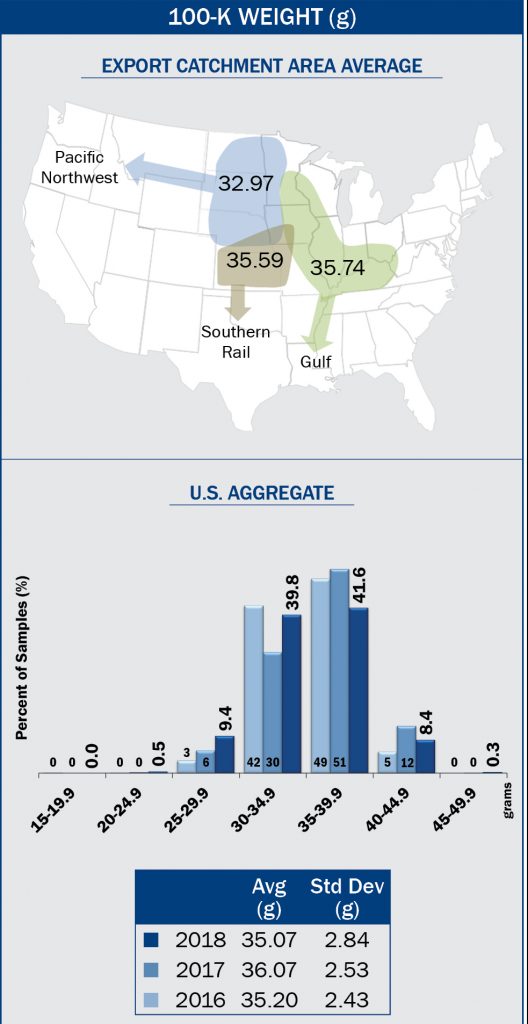 Kernel volume, measured in cubic centimeters (cm3), is often indicative of growing conditions. If conditions are dry, kernels may be smaller than average. If drought hits later in the season, kernels may have lower fill. Small or round kernels are more difficult to degerm. Additionally, small kernels may lead to increased cleanout losses for processors and higher yields of fiber. 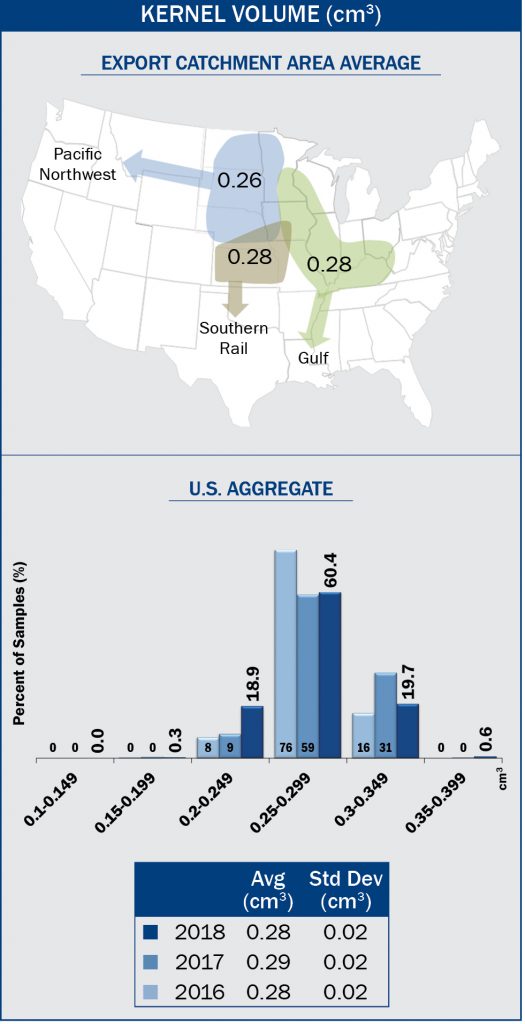 Kernel true density is calculated as the weight of a 100-k sample divided by the volume, or displacement, of those 100 kernels and is reported as grams per cubic centimeter (g/cm3). True density is a relative indicator of kernel hardness, which is useful for alkaline processors and dry millers. True density may be affected by the genetics of the corn hybrid and the growing environment. Corn with higher density is typically less susceptible to breakage in handling than lower density corn but is also more at risk for the development of stress cracks if high-temperature drying is employed. True densities above 1.30 g/cm3 indicate very hard corn, which is typically desirable for dry milling and alkaline processing. True densities near the 1.275 g/cm3 level and below tend to be softer, but process well for wet milling and feed use. 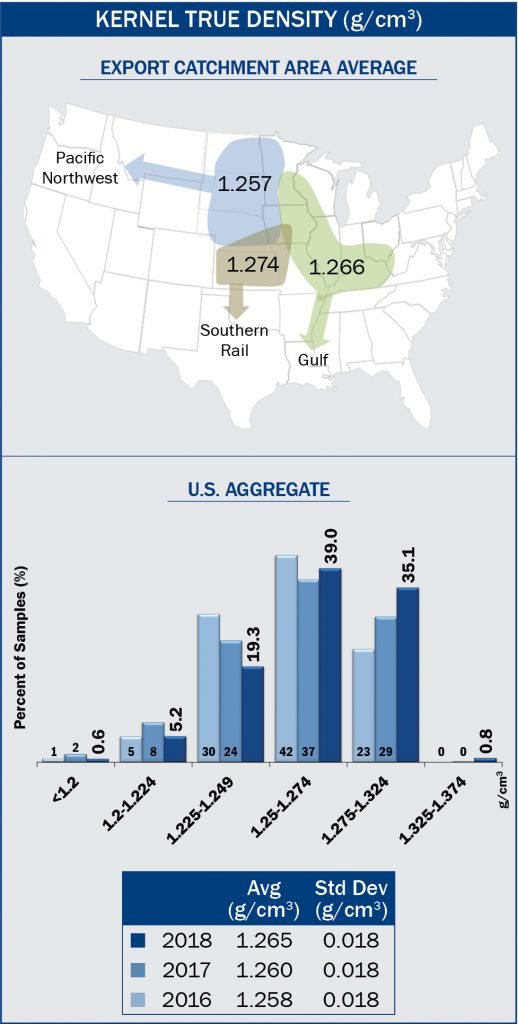 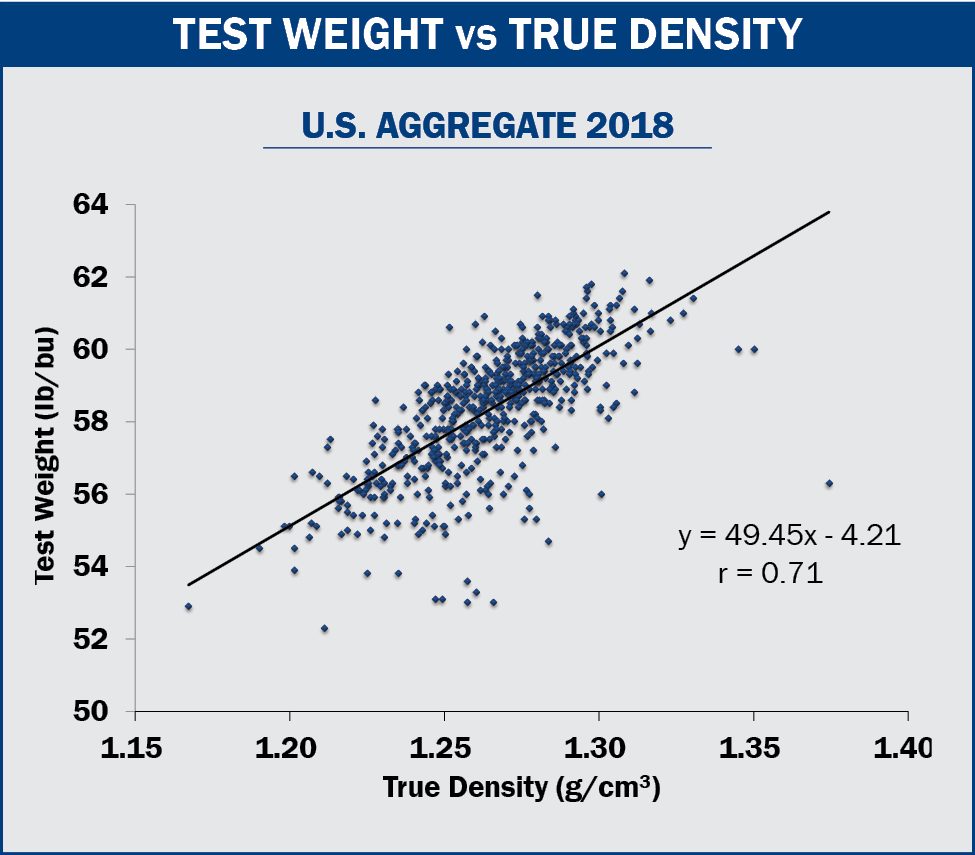 Though the name suggests some inverse relationship between whole kernels and BCFM, the whole kernels test conveys different information than the broken corn portion of the BCFM test. Broken corn is defined solely by the size of the material. Whole kernels, as the name implies, is the percent of fully intact kernels in the sample with no pericarp damage or kernel pieces chipped away.

The exterior integrity of the corn kernel is very important for two key reasons. First, it affects water absorption for alkaline cooking and steeping operations. Kernel nicks or pericarp cracks allow water to enter the kernel faster than intact or whole kernels. Too much water uptake during cooking can result in loss of soluble, non-uniform cooking, expensive shutdown time and/or products that do not meet specifications. Some companies pay contracted premiums for corn delivered above a specified level of whole kernels.

Second, intact whole kernels are less susceptible to storage molds and breakage in handling. While hard endosperm lends itself to the preservation of more whole kernels than soft corn, the primary factor in delivering whole kernels is harvesting and handling. This begins with proper combine adjustment followed by the severity of kernel impacts due to conveyors and number of handlings required from the farm field to the end user. Each subsequent handling will generate additional breakage. Actual amounts of breakage increase exponentially as moisture decreases, drop heights increase and/or a kernel’s velocity at impact increases.3 In addition, harvesting at higher moisture contents (e.g., greater than 25%) will usually lead to soft pericarps and more pericarp damage to corn than when harvesting at lower moisture levels. 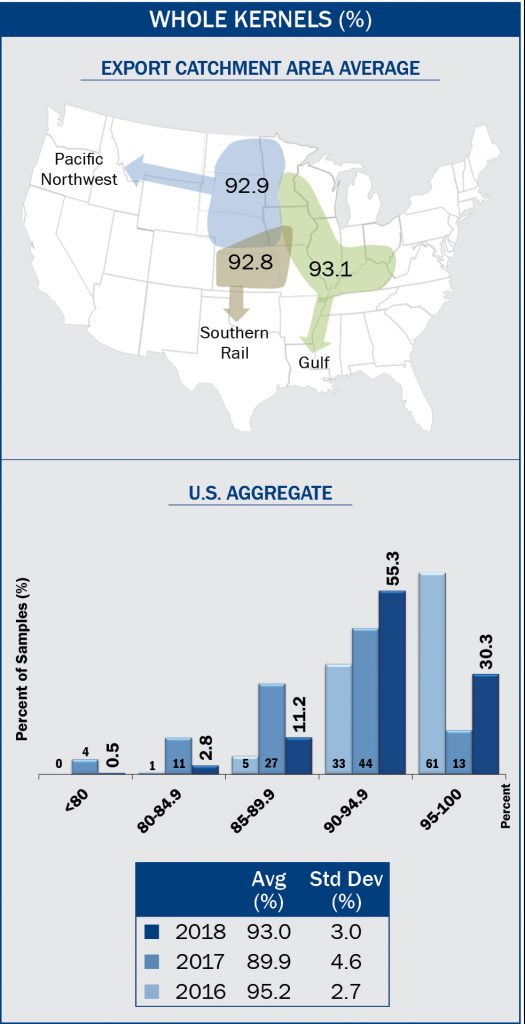 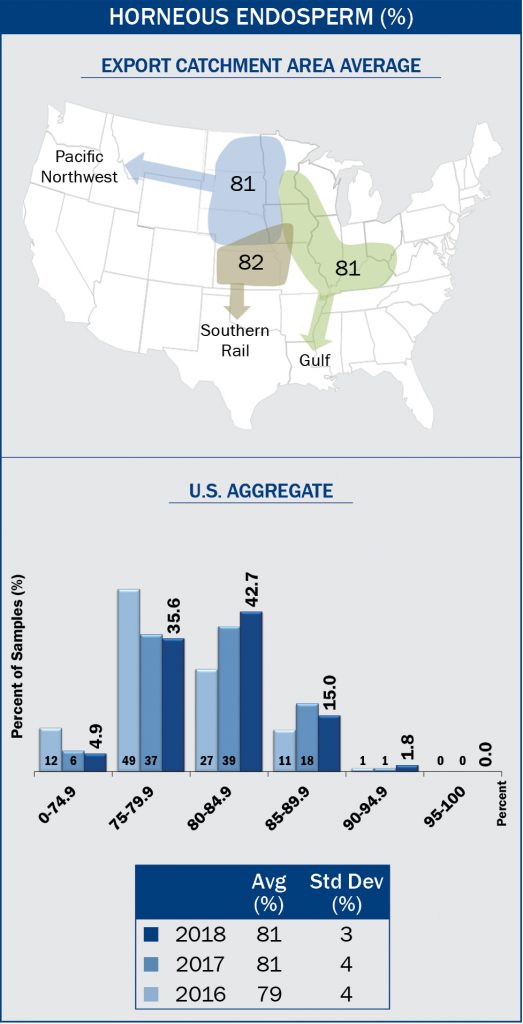 The horneous (hard) endosperm test measures the percent of horneous or hard endosperm out of the total endosperm in a kernel, with a potential value from 70% to 100%. The greater the amount of horneous endosperm relative to soft endosperm, the harder the corn kernel is said to be. The degree of hardness is important depending on the type of processing. A hard kernel is needed to produce high yields of large flaking grits in dry milling. Hard to medium hardness is desired for alkaline cooking. Medium to soft hardness is used for wet milling and livestock feeding.

Hardness has been correlated to breakage susceptibility, feed utilization/efficiency and starch digestibility. As a test of overall hardness, there is no good or bad value for horneous endosperm; there is only a preference by different end users for particular ranges. Many dry millers and alkaline cookers would like greater than 85% horneous endosperm, while wet millers and feeders would typically like values between 70% and 85%. However, there are certainly exceptions in user preference. 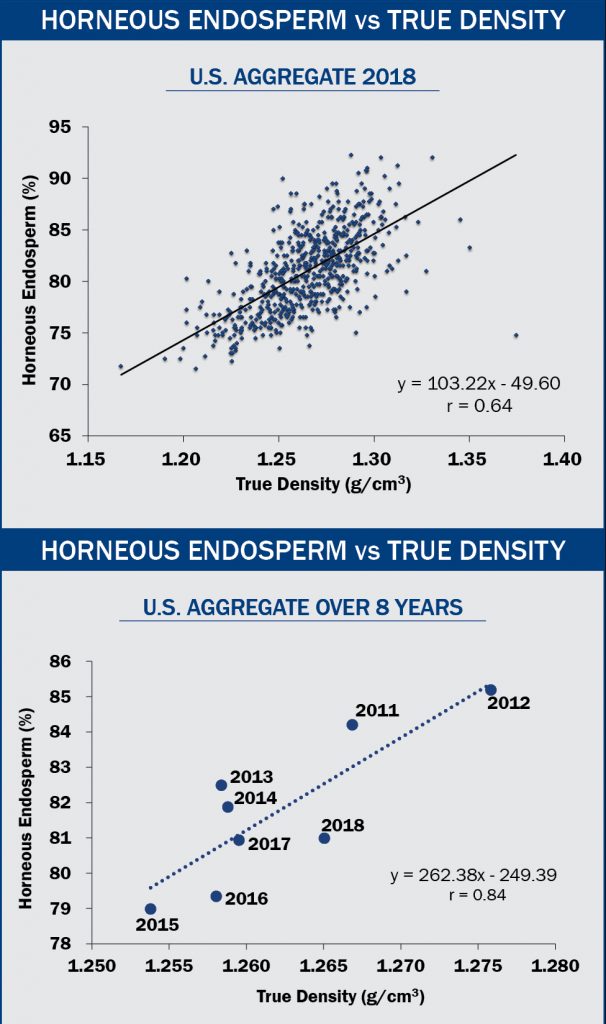