The USDA FGIS has established numerical grades, definitions and standards for measurement of many quality attributes. The attributes that determine the numerical grades for corn are test weight, BCFM, total damage and heat damage. A table displaying the numerical requirements for these attributes is included in the “U.S. Corn Grades and Conversions” section of this report. 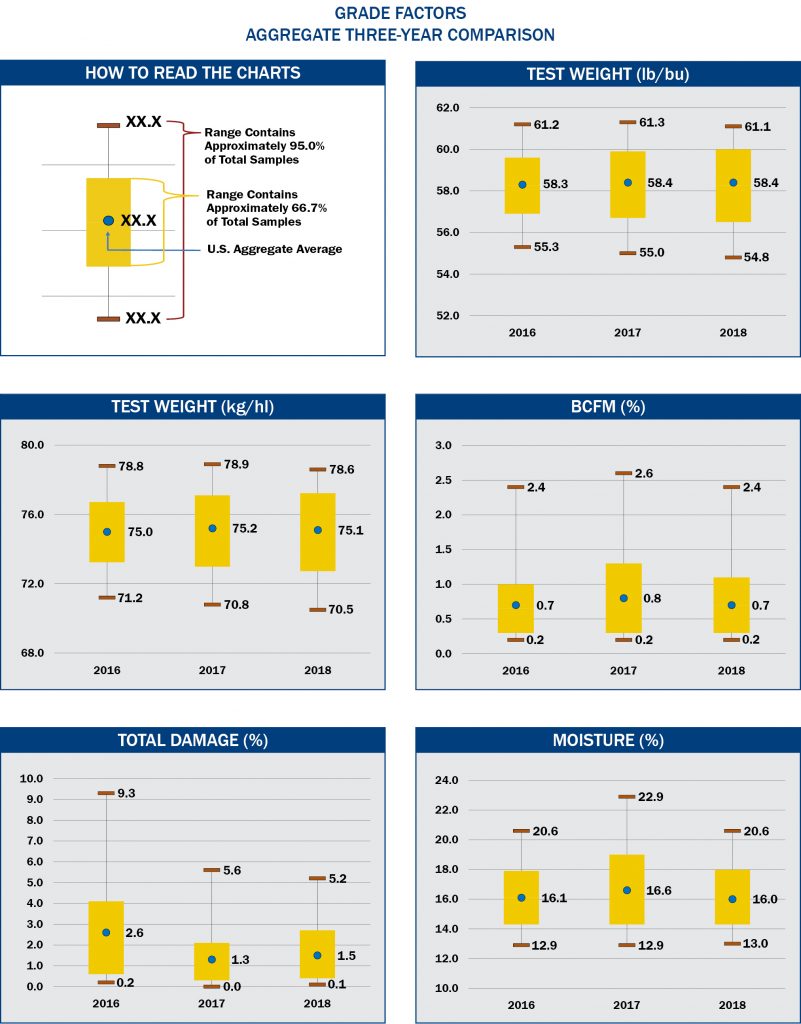 Test weight (weight per volume) is a measure of bulk density and is often used as a general indicator of overall quality and as a gauge of endosperm hardness for alkaline cookers and dry millers. High test weight corn takes up less storage space than the same weight of corn with a lower test weight. Test weight is initially impacted by genetic differences in the structure of the kernel. However, it is also affected by moisture content, method of drying, physical damage to the kernel (broken kernels and scuffed surfaces), foreign material in the sample, kernel size, stress during the growing season and microbiological damage. When sampled and measured at the point of delivery from the farm at a given moisture content, high test weight generally indicates high quality, high percent of horneous (or hard) endosperm and sound, clean corn. Test weight is positively correlated with true density and reflects kernel hardness and good maturation conditions. 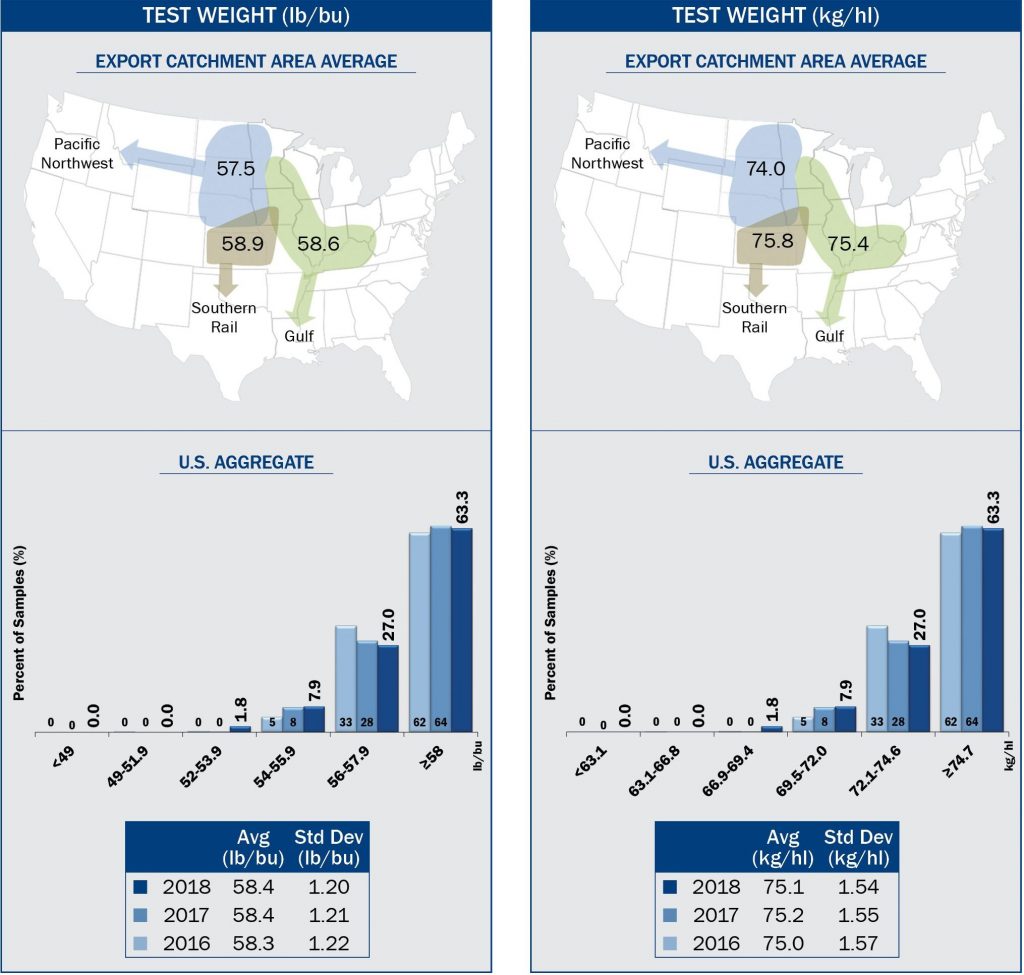 BCFM is an indicator of the amount of clean, sound corn available for feeding and processing. The lower the percentage of BCFM, the less foreign material and/or fewer broken kernels are in a sample. Higher levels of BCFM in farm-originated samples generally stem from harvesting practices and/or weed seeds in the field. BCFM levels will normally increase during drying and handling, depending on the methods used and the soundness of the kernels. 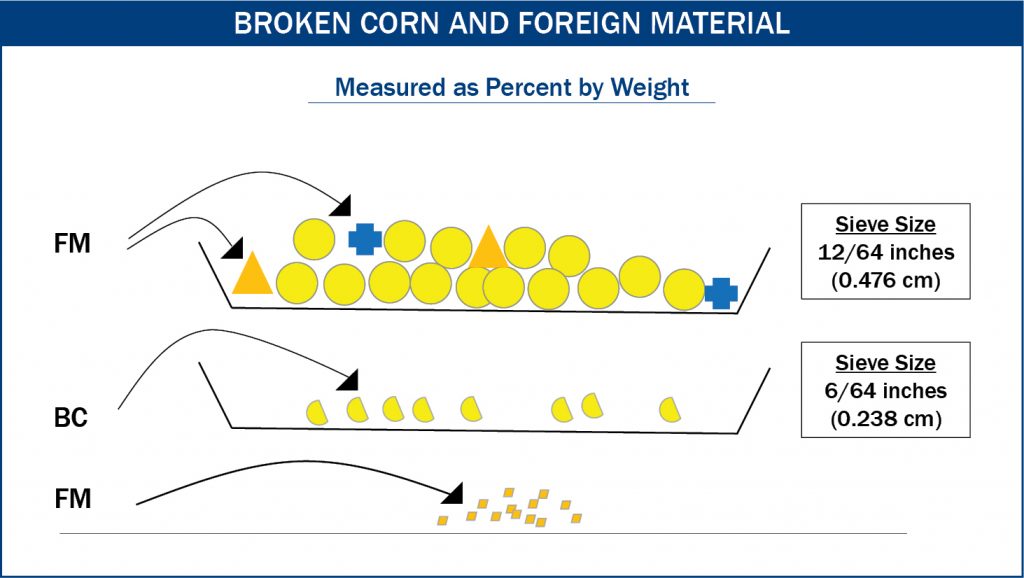 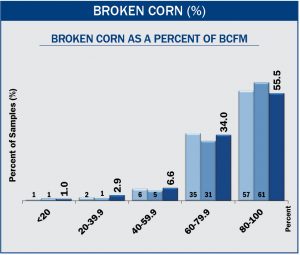 Broken corn in U.S. grades is based on particle size and usually includes a small percent of the non-corn material. Broken corn is more subject to mold and insect damage than whole kernels, and it can cause problems in handling and processing. When not spread or stirred in a storage bin, broken corn tends to stay in the center of the bin, while whole kernels are likely to gravitate outward to the edges. The center area in which broken corn tends to accumulate is known as a “spout-line.” If desired, the spout-line can be reduced by drawing this grain out of the center of the bin. 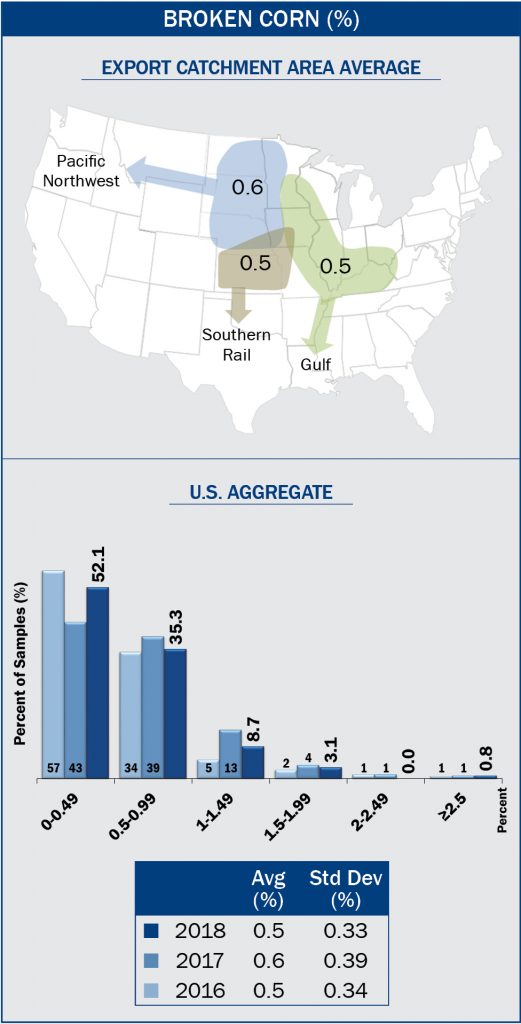 Foreign material is important because it has reduced feeding or processing value. It is also generally higher in moisture content than corn and therefore creates a potential for deterioration of corn quality during storage. Additionally, foreign material contributes to the spout-line (as mentioned in Broken Corn). It also has the potential to create more quality problems than broken corn, due to its higher moisture level. 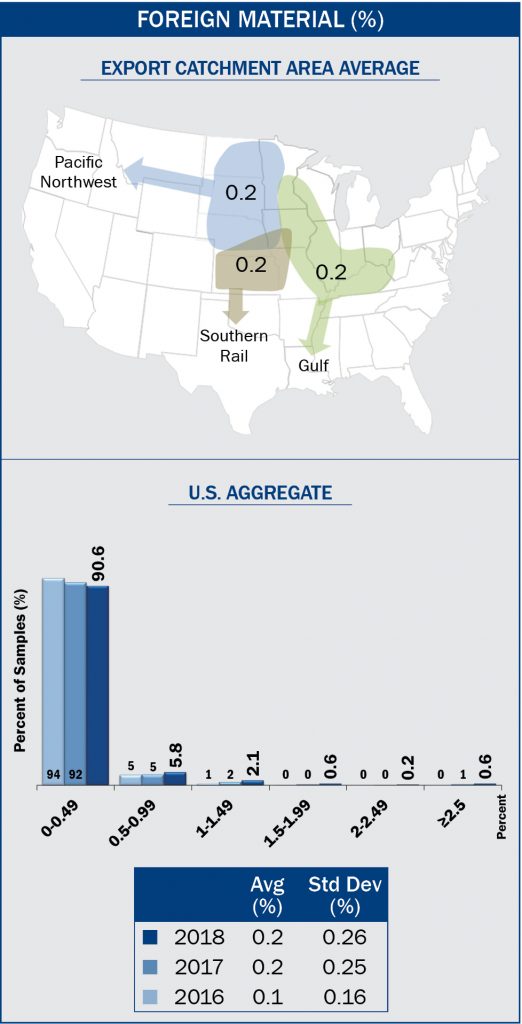 Total damage is the percent of kernels and pieces of kernels that are visually damaged in some way, including damage from heat, frost, insects, sprouting, disease, weather, ground, germ and mold. Most of these types of damage result in some sort of discoloration or change in kernel texture. Damage does not include broken pieces of grain that are otherwise normal in appearance.
Mold damage is usually associated with higher moisture contents and warm temperatures during the growing season and/or during storage. There are several field molds, such as Diplodia, Aspergillus, Fusarium and Gibberella, that can lead to mold-damaged kernels during the growing season if the weather conditions are conducive to their development. While some fungi that produce mold damage can also produce mycotoxins, not all fungi produce mycotoxins. Chances of mold decrease as corn is dried and cooled to lower temperatures. 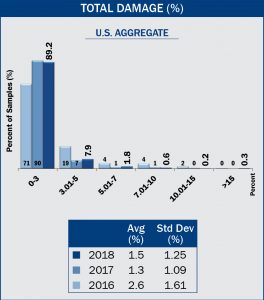