The Trump Administration’s announcement of $60 billion in new tariffs against Chinese imports into the United States – and the likely retaliation against U.S. agricultural products it will prompt – topped a week of new initiatives and further tension in global trade policy.

In a statement, U.S. Grains Council (USGC) President and CEO Tom Sleight said the organization was not surprised but is dismayed by the new tariffs, which will lead to “painful retaliation” and have already complicated global efforts to promote sales of U.S. grains and grain products. 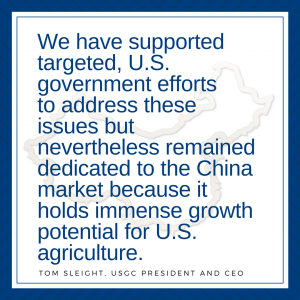 “The farmers and exporters we represent have been here before in our relationship with China,” Sleight said, describing trade policy actions by China against U.S. distiller’s dried grains with solubles (DDGS), sorghum, ethanol and corn. “We have supported targeted, U.S. government efforts to address these issues but nevertheless remained dedicated to the China market because it holds immense growth potential for U.S. agriculture.”

In the near term, he said the Council will work to continue efforts to spur demand that supports prices this crop year, though that is challenged by the reputational hits the United States has taken in recent months based on trade policy concerns among global customers.

Members of the Trump Administration speaking at events and before Congress this week emphasized that its actions related to China are intended to improve the trading relationship over the long term but will likely involve short-term impacts, especially on agriculture.

Ray Starling, special assistant to President Trump covering agriculture, speaking at an AgriPulse forum, said the Administration would do “everything within our power” to protect farmers but was not forthcoming with details on specific measures to protect agriculture exports.

Meanwhile, Gregg Doud, the newly-sworn-in chief agriculture negotiator at the Office of the U.S. Trade Representative (USTR), said the Trump Administration would continue to pursue cases against China at the World Trade Organization (WTO) focused on corn and other grain subsidies and tariff rate quotas (TRQs) affecting those products.

Separately, new tariffs on steel and aluminum imports that were announced two weeks ago are slated to go into effect on Friday. USTR Robert Lighthizer said Thursday several key trading partners will be temporarily excluded from those measures, including Mexico, Canada, South Korea, Australia, Argentina, Brazil and the European Union, which should stave off retaliation from large U.S. grains customers. The Council strongly urged this consideration for many key trading partners, notably South Korea.

Lighthizer testified this week before the House Ways and Means Committee on the new tariff regime and a variety of other trade topics, including plans to pursue new market access. When asked about possible new free trade agreement partners, he mentioned the Philippines and Japan.

Several members of Congress voiced concern related to the tariffs announcements and trade policy efforts like the pending renegotiation of the North American Free Trade Agreement (NAFTA), including Senate Finance Committee Chairman Orrin Hatch (R-Utah), House Ways and Means Committee Chairman Kevin Brady (R-Texas) and farm state senators worried about agriculture impacts. The ongoing Congressional reaction will be critical to watch in coming weeks and months as tariffs come into effect and trade policy negotiations in which the United States is engaged continue.

Relatedly, the Trump Administration requested of Congress a three-year extension of trade promotion authority, which allows the executive branch to negotiate and submit trade agreements for an up-or-down vote by Congress.