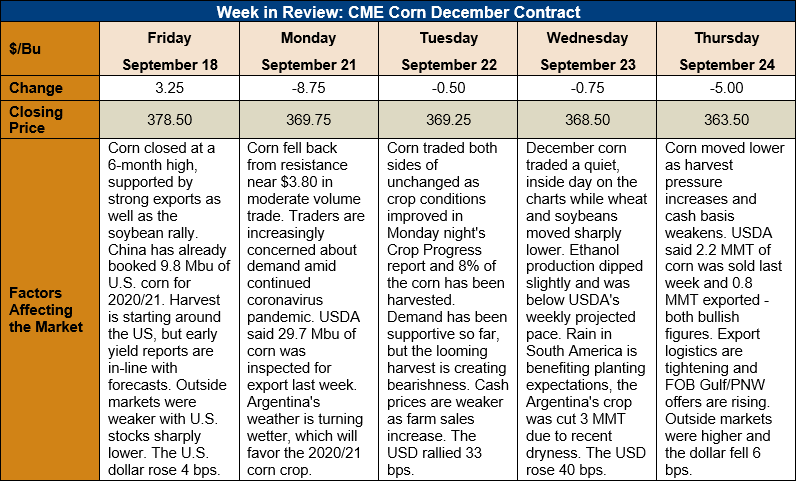 The weekly Crop Conditions report showed 61 percent of U.S corn rated good/excellent, a 1 percent increase from the prior week. The U.S. crop is ahead of its normal maturity pace, with 59 percent rated mature in this week’s report, versus 49 percent on average. Eight percent of the U.S. crop has been harvested, slightly behind the five-year average pace of 10 percent. The U.S. sorghum harvest is advancing as well, with 27 percent of the crop harvested, down slightly from the five-year average of 29 percent. Good weather is expected for the major U.S. crop-growing areas, which should help the fall harvest increase speed this week and next.

The weekly Export Sales report showed another week of large export sales for corn. Net sales totaled 2.139 MMT, up 33 percent from the prior week and historically large. Even with the strong rally in futures and cash prices, U.S. Gulf corn remains the most competitive origin for many buyers, creating the surge in export purchases. Weekly exports totaled 0.845  MMT, down 6 percent from the prior week. YTD exports total 1.993 MMT, up 74 percent, while YTD bookings (exports plus unshipped sales) total 22.595 MMT, up 147 percent.

International interest in U.S. sorghum has remained strong as well, with the Export Sales report showing a 449 percent YTD increase in sorghum exports. Through 17 September, U.S. sorghum exports total 176.9 KMT and bookings stand at 2.763 MMT. Sorghum prices have rallied sharply through the summer but international demand, particularly from China, has continued to validate and support higher prices.

Cash corn prices are slightly lower this week with the national average price reaching $3.41/bushel, down slightly from recent highs near $3.50. Farm sales have increased substantially on the CBOT’s recent rally and basis levels are starting to widen out across the U.S. Export demand remains strong and logistics will remain tight into the fall, which is keeping FOB Gulf offers supported.

From a technical standpoint, December corn futures are retreating from major resistance at $3.80 but are facing technical support at $3.60 – the 200-day moving average. Trading volume has been light on the recent decline, which suggests the move is more likely a short-term pullback rather than a long-term trend reversal. With over 90 percent of the U.S. crop still yet to be harvested there is still weather/production risk remaining. Consequently, speculative traders may continue holding their long positions until the harvest is further along.