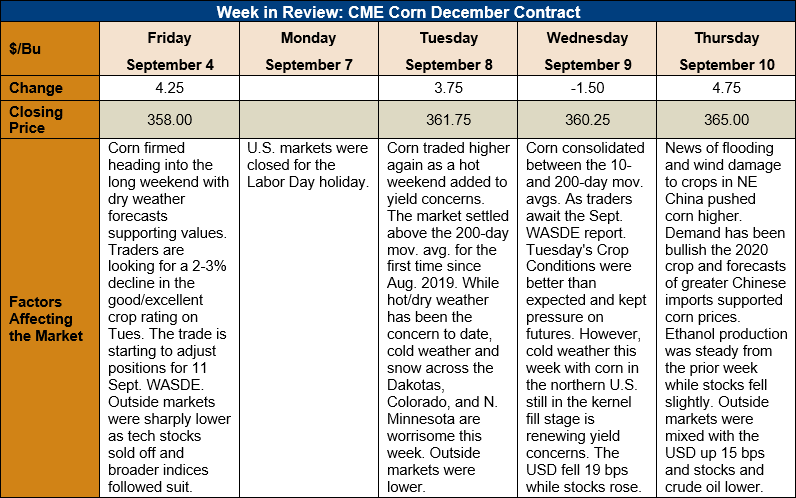 Outlook: December corn futures are 7 cents (2 percent) higher this week as supply and yield concerns increase for the U.S. and other parts of the world. After a hot, dry August, the parts of the U.S. corn crop are now facing cold/freezing temperatures as the crop finished the grain-fill stage. In China, flooding and potential wind damage are causing yield and production concerns. The market has rallied sharply ahead of the September WASDE and traders are eagerly awaiting USDA’s fresh U.S. yield estimates.

The weekly Crop Conditions report showed 61 percent of U.S corn rated good/excellent, a 1 percent decrease from the prior week, which was less than expected. The rating is slightly below the five-year average rating of 65 percent good/excellent. This week, frosts/freezes in the Dakotas and Northern Minnesota are causing concerns about yield damage as crops in those areas are finishing grain fill.

A recent series of typhoons hit northeast China, the country’s main corn-growing region, and are causing concerns for yield and production in that country. Reports indicate severe lodging in some fields, though the expectation is that some of that corn will recover later. Production loss estimates range from 3-10 MMT with little consensus.

The weekly Export Sales report was delayed due to Monday’s U.S. Labor Day holiday, but the weekly Export Inspections report showed an 84 percent increase in corn shipments. For the week ending 3  September, U.S. corn export inspections totaled 781,000 MT, bringing 2020/21 marketing-year-to-date inspections to 234,000 MT. That figure is down 50 percent from this same week in 2019 but the large new-crop sales already booked suggest that inspections will rise quickly.

From a technical standpoint, December corn futures posted two bullish developments heading into the WASDE report. On Tuesday, the contract settled above the 200-day moving average for the first time since August 2019, an achievement that is likely to bring additional speculative buying. On Thursday, expectations for a strong 2020/21 export program pushed the market to a new high for the summer 2020 rally. The contract settled at $3.65, which can be considered a technical win for bulls. The market is trending higher and is not yet in overbought territory, according to the Relative Strength Index. While the fundamentals presented in the September WASDE will ultimately drive market action this fall, the current technical picture offers a bullish outlook.