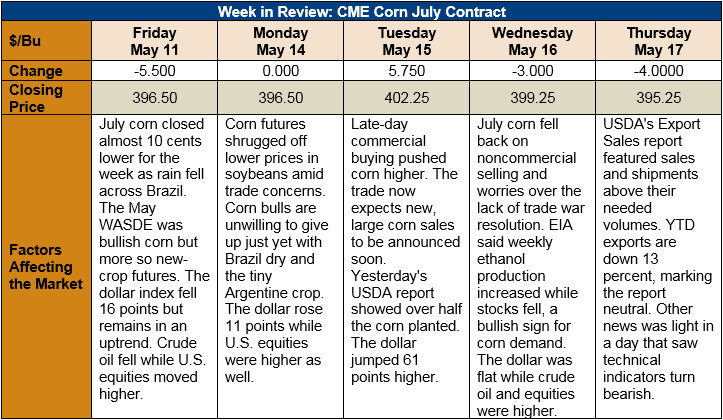 Outlook: Following the May WASDE, July futures have received little fresh news to spark a move one way or another. The short-term trend is lower, but a long-term uptrend is underpinning corn valuations. Old-crop supplies are now fixed, and exports/ethanol production are the only remaining demand variables where substantial change is likely.

Brazil’s second-crop corn remains under duress from dry weather across much of the country. Rainfall has been below-normal for most of the key agricultural areas over the past two weeks as the crop approaches its key reproductive stage. The hot, dry weather is prompting some agencies to lower forecasts of the country’s production forecasts to 25-27 MMT. A crop this size would tighten the world balance sheet but is unlikely to spark a rally like the Argentine drought did earlier this year.

Despite a slow start, U.S. corn planting has caught up with its typical pace. On Monday, USDA reported 62 percent of the crop was planted, nearly equal to the five-year average of 63 percent. Wet weather across the upper Midwest this week may delay completion of planting, but next week’s report should feature 75 percent or more of the crop in the ground.

From a technical perspective, July corn is sitting at support from the 40-day moving average and is roughly half-way between the high/low of its recent trading range. Bears could push the contract lower to $3.86/bushel before the long-term uptrend offers support. Past that, dryness in Brazil combined with the possibility for adverse summer weather in the U.S. will offer fundamental support. The market is not likely to remove the present risk premium unless above-average U.S. yields are confirmed. Conversely, the market is not likely to add substantial risk premiums unless a new bullish story develops. Choppy trading can be expected going forward.