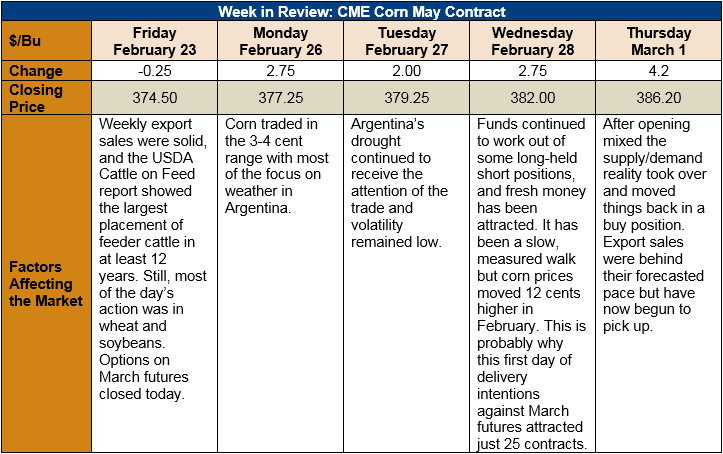 Outlook: USDA’s 2018/19 forecast, including unchanged corn acres and a big yield estimate, has had little impact on the market with weather instead being the single largest driver. Precipitation in Argentina and the U.S. Southern Plains remains non-existent to disappointing. Analysts are now describing the situation in Argentina as “disastrous” or even “record-breaking.”

Not only will the drought reduce Argentina’s corn crop, but some believe that wet weather delaying Brazil’s soybean harvesting will roll over into a delay in second crop corn acres. One research firm pegged Brazilian corn production down by 4.5 MMT. Though the International Grains Council has only reduced its global corn production forecast by 6 MMT, South American production alone could be down 10-15 MMT, which is a very small fraction of global corn production but a much more significant share of the actual volume traded.

The demand side remains strong with private exporter data and export sales inspections exceeding analysts’ expectations. Logistics in the PNW have become a concern as half the corn headed to Asia is now designated for this exit point. The level of ongoing demand for Ukrainian corn by China following that nation’s holidays remains a question. If Chinese demand remains solid, then Ukrainian prices could move to $190/MT or higher. U.S. corn at the Gulf remains the world’s cheapest option.

Managed money has moved into a net long position. There is always the chance for a short-lived correction downward, but the risk remains to the high side and many farmers are holding out for higher prices this summer. Their delayed selling strategy coupled with flooding along the inland waterway is causing some logistical delays at the Gulf. One risk of lower prices is if the El Nino currently causing weather problems in South America begins to break down earlier than the forecast last half May/June timeframe.

The U.S. dollar gained 1.2 percent in value in February, encouraged by expected interest rate rises by the Federal Reserve. However, dollar value should be held in check unless the U.S. economy breaks out into higher than expected economic growth relative to the rest of the world.