DDGS Comments: U.S. DDGS prices are $3/MT higher this week with buyer interest picking up after the holidays and the ongoing rally in soymeal also offering support. Livestock feeders are increasingly turning to DDGS as soymeal values rise and FOB plant DDGS values are up $7-10/MT from early December. The DDGS/soymeal ratio is at 0.43 this week, up from 0.42 last week and below the three-year average of 0.47. The DDGS/cash corn ratio is at 0.88 this week, up from 0.87 the prior week but below the three-year average of 1.07.

DDGS markets are returning from the holidays with mixed pricing directions. Barge CIF NOLA and FOB U.S. Gulf offers are down $1-2/MT for January/early February shipment but are higher for deferred positions. Barge rates for late February and March are up $6 and $4/MT, respectively, while FOB Gulf offers are essentially steady for those positions. Offers for 40-foot containers to Southeast Asia are generally $3 lower, though values to Indonesia are up $8-9, product into Myanmar is up $3-4, while containers to Thailand are down $15-20/MT. The average price for containerized DDGS to Southeast Asia reached $360/MT this week. 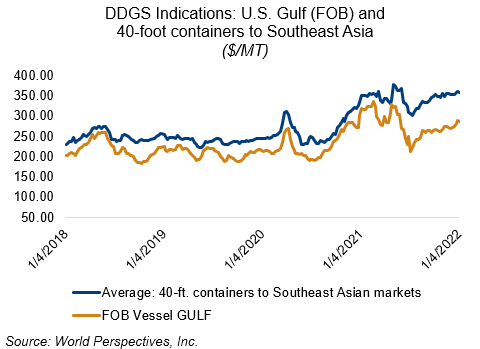