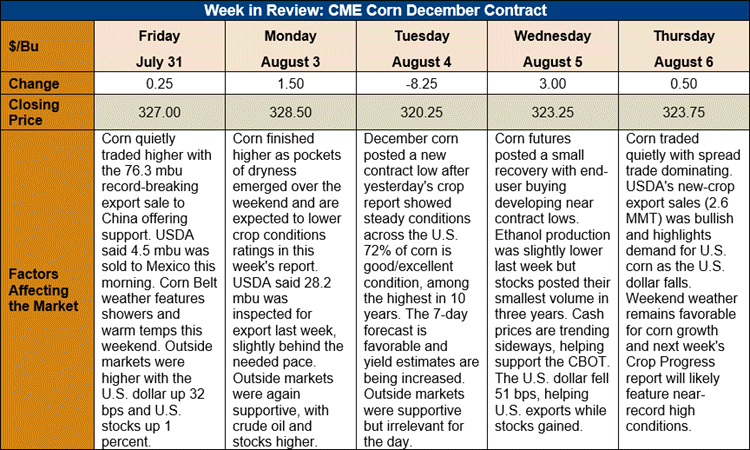 Outlook: December corn futures are 3 ¼ cents (1 percent) lower this week after another report of excellent U.S. crop ratings pushed the market lower on Tuesday. December corn marked a new contract low on Tuesday but has since firmed and recovered some of the day’s losses as commercial and end-user buying developed. Funds remain heavily short the corn market but have not significantly added to that position this week, with spread trade being the dominant feature Wednesday and Thursday. The market is now focused on estimating the size of the U.S. corn crop, as well as adjusting positions for the August WASDE.

Late Monday, USDA reported that 72 percent of U.S. corn was rated in good/excellent condition, a rating unchanged from the prior week despite warm weekend temperatures across the Midwest. The rating remains among the highest of the past decade and is helping ensure large corn yields this fall. Peak corn pollination is all but finished, with 92 percent of the crop reported as silking. That statistic is 5 percent ahead of the five-year average, showing the heightened maturity of this year’s crop. Thirty-nine percent of the crop is in the “dough” state, up 6 percent from the five-year average.

The advanced maturity and excellent condition of the 2020 U.S. corn crop continue to drive discussions of large or record-breaking yields. One private firm this week estimated the U.S.-average corn yield at a record high 11.46 MT/ha (182.5 bushels/acre). It will be interesting to see what USDA plugs into its balance sheet in the August WASDE. History suggests that USDA’s August estimates tend to be conservatively close to the July yield, meaning the agency is unlikely to issue a record-large forecast next week.

From a technical standpoint, December futures are stabilizing after posting a new contract low ($3.20) on Tuesday. Commercial buying and end-user pricing activity has been active as prices moved lower, which has resulted in firmer trade Wednesday and Thursday. The fact the market did not retest its new contract lows or post further losses suggests selling interest has waned. The market is approaching technically oversold levels and stochastic indicators are turning higher, offering a near-term outlook for higher trade.