With the Canadian government’s approval of the United States-Mexico-Canada Agreement (USMCA) on Friday, March 13, the trade pact has now been fully ratified by the respective legislatures in all three countries. Expected to go into effect this summer, the USMCA marks an important, positive milestone in trade negotiations between the three countries over the last three years – and one that required a massive collaboration between organizations like the U.S. Grains Council (USGC), farmers, agribusinesses and government officials.

The agreement includes several advantages for the agricultural sector, including:

“Our leaders and members are thrilled to see the completion of the U.S.-Mexico-Canada Agreement’s approval process and look forward to it entering into force,” said Darren Armstrong, USGC chairman and farmer from North Carolina, in a statement about Canada’s USMCA approval.

Trade Interrelationships Made Possible By NAFTA

The work in the agricultural sector over the last three years to reach a fully-approved trade agreement is emblematic of the geographically and logistically linked supply chains for U.S. grains in all forms (GIAF) between the United States, Mexico and Canada. 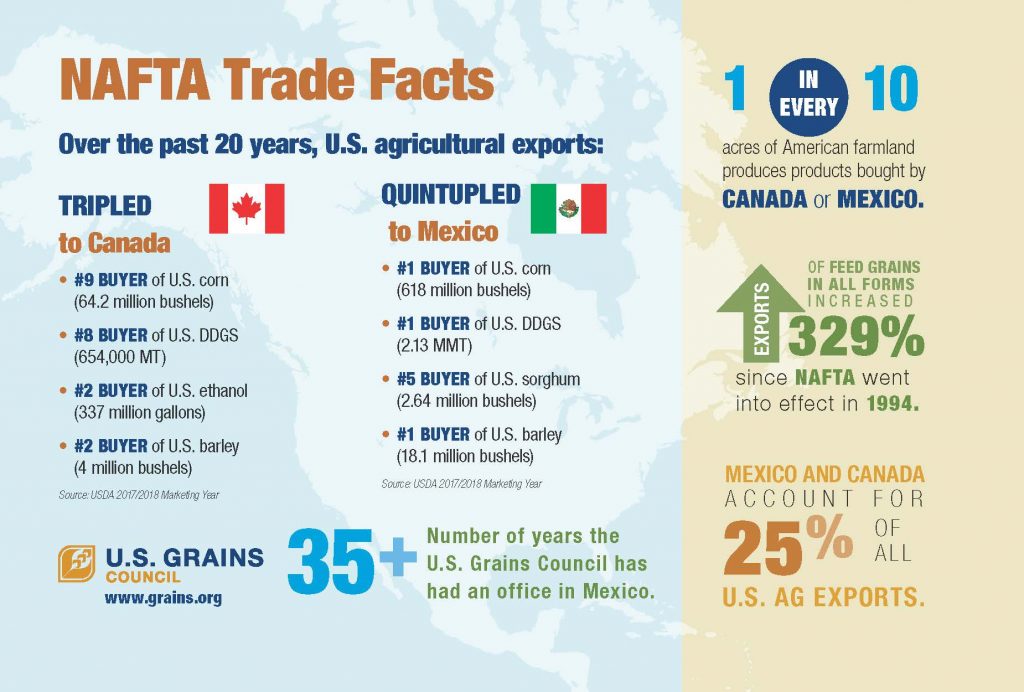 The most important provisions in the new USMCA preserve the foundational duty-free market access for U.S. coarse grains and co-products established by the North American Free Trade Agreement (NAFTA), which went into effect in January 1994. While zero tariffs opened the doors to trade, robust market development work by groups like the Council and its members helped develop highly efficient supply chains between all three countries that maximized natural geographic proximity.

“NAFTA has had an enormous positive impact on the agricultural and food sectors in the United States and the same can be said for the livestock industry in Mexico,” said Ryan LeGrand, USGC president and chief executive officer, who served as the organization’s director in Mexico before assuming his current role. “Access to affordable grains and reliable shipments from the United States has really helped these industries establish long-term relationships and grow since the signing of NAFTA.”

Trade has flourished based on these positive logistical factors and increased ties between customers and suppliers on both sides of each border. Overall, exports of U.S. grains in all forms (coarse grains, co-products, ethanol and meat) have increased 309 percent to Mexico and 508 percent to Canada since the start of the agreement.

Mexico now dominates nearly every category of U.S. grains in all forms – setting a record high in the 2018/2019 marketing year at 25.6 million metric tons, equivalent to one billion bushels. By category, Mexico was the top buyer of U.S. corn, dried distiller’s grains with solubles (DDGS), barley/barley products in addition to ranking as the third largest market of U.S. sorghum and the 10th largest market for U.S. ethanol.

This strong export growth to Mexico and Canada made completing the USMCA critical to maintaining and expanding these top markets. The Council worked extensively during the USMCA negotiation process with key officials in the U.S. Department of Agriculture (USDA) and the office of U.S. Trade Representative (USTR). The Council and its partners also worked with Mexico’s USDA-equivalent, Agriculture and Agri-Food Canada and industry representatives from the Mexican and Canadian livestock, agri-food trade and food and consumer products sectors. In addition, the Council kept in close contact with Mexican and Canadian customers to share concerns, ask questions and maintain open lines of communication.

In 2017, immediately following the announcement that the existing NAFTA would be renegotiated, the Council took to the road to talk to customers. In March, USGC leadership traveled to Mexico, followed by the USGC board of directors in June. While in Mexico, these leaders were able to talk with both Mexican end-users and representatives of the Mexican government, including meetings with ANFACA, AMEPA and CONAFAB, major associations representing the local livestock feeding industries.

In August, the Council organized a team of U.S. and Mexican media members to travel to south Texas and Mexico to see firsthand the value NAFTA has created and talk to key stakeholders in the negotiations – grain producers, exporters, buyers and users. The journalists visited U.S. farmers near the border, saw a border crossing as grain passed through by truck, and connected with one of the feed millers who accepted that grain just hours later.

In November, leadership from both the Council and the National Corn Growers Association (NCGA) reiterated support for trade during an officers’ mission to Mexico. In November 2019, USGC and NCGA leadership was joined by leaders from the United Sorghum Checkoff Program (USCP) and the National Barley Growers Association (NBGA) in again pledging support for the trade relationship during a mission to Mexico and building relationships with the presidential administration of Andrés Manuel López Obrador, known as AMLO, as they prepared to take office in December.

All of these activities allowed the Council to continue its engagement with longtime partners in Mexico and Canada, provide timely input to U.S. negotiators and keep members informed about the progress of the talks and the status of U.S. market share throughout.

In turn, those members – including the NCGA, National Sorghum Producers and all of individual state organizations – served a vital role within the United States and in communication with customers to share the story of trade’s impact on farms and rural America. Trade advocacy through trade teams and in-country missions, trade education activities like trade schools and social media presence all combined to connect those in farm country with their customers and increase understanding of how important these trade relationships are to the farm economy.

Throughout the negotiation period, day-to-day market development activities continued, like they have for the Council’s 30 year history in Mexico. 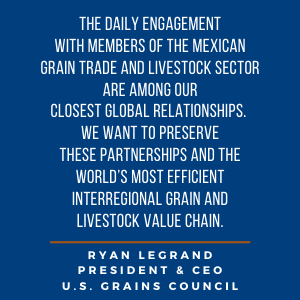 Trade teams traveled to the United States to examine the value chains for all the commodities the Council represents – corn, DDGS, ethanol, barley, sorghum. Regional events like the Ethanol Summit of the Americas, Export Exchange and Export Sorghum all provided additional opportunities for customers in Mexico and Canada to meet directly with U.S. farmers, agribusiness suppliers and government officials.

“The daily engagement with members of the Mexican grain trade and livestock sector are among our closest global relationships,” LeGrand said in a media briefing for Farmers For Free Trade in March 2018. “We want to preserve these partnerships and the world’s most efficient interregional grain and livestock value chain.

On the ground in Mexico and Canada, the Council’s staff have conducted feeding trials, explored expanded supply chain options, discussed crop quality, held educational seminars and continued to show why the United States is the most reliable and transparent supplier of coarse grains, co-products and ethanol to these markets.

“We have great allies north of our border and south of our border,” LeGrand said. “We have the same goals of growth in our businesses and our sector. USMCA creates that certainty to keep the borders open for grain and ethanol to flow.”

The USCMA provides the framework needed to turn these ongoing market development activities into realized sales in addition to solidifying two of the consistent top markets for U.S. feed grains in all forms. 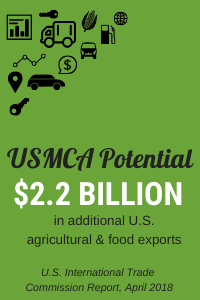 USGC Past Chairman Jim Stitzlein testified before the U.S. International Trade Commission (ITC) in November 2018 on the importance of USMCA as part of that body’s work to analyze the agreement for Congress. Stitzlein said the pact would remove remaining barriers to grain trade in the region and bolster continued growth in North American markets for coarse grains and value-added grain products like meat and ethanol.

“Trade agreements hold the key to opening markets and resolving tariff and non-tariff barriers to allow movement of coarse grains, co-products in all forms and other agricultural exports where they are demanded,” Stitzlein said in his testimony. “We believe both Mexico and Canada offer significant additional potential for growth. USMCA, like NAFTA before it, will be the foundation of that success.”

The ITC’s report, released in April 2018, concluded the USMCA would boost U.S. gross domestic product (GDP) by $68.2 billion and add roughly 176,000 jobs. According to the analysis, the combined effect of all USMCA provisions would increase total U.S. agricultural and food exports by $2.2 billion when fully implemented.

Typically, ITC reports under the TPA process measure the economic impact of new trade agreements. Because the USMCA maintains zero tariffs on U.S. feed grains, co-products and ethanol provided by NAFTA, the ITC report by itself could not fully capture the full economic benefit of USMCA.

Similar analysis done before NAFTA went into effect also showed likely growth for feed grains, but at a much smaller order of magnitude than the combination of strong trade policy, robust market development and grain markets have created over the past 25 years.

“The Council has built trusted relationships in Canada and Mexico over decades of work together,” Armstrong said. “This agreement is foundational to our global trade policy and critical to the growth of the agricultural sectors in all three countries.”

Learn more about the Council’s work in Mexico and Canada.