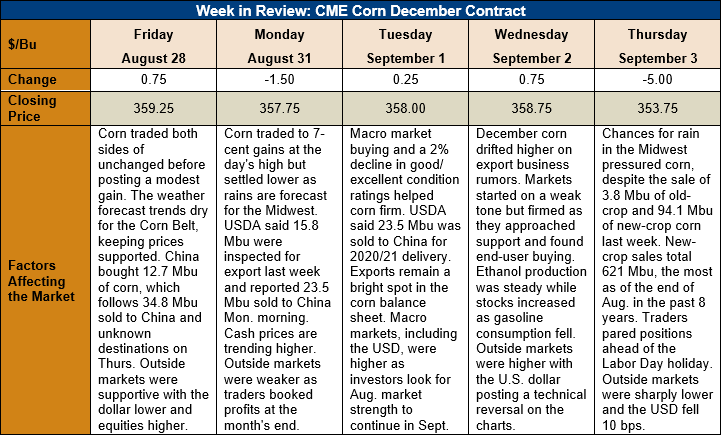 Outlook: December corn futures are 5.5 cents (1.5 percent) lower this week as the market has turned sideways ahead of the September WASDE. Last week’s rally saw funds quickly exiting their short positions while commercial firms increased pricing ideas. That combination helped December corn futures enter a new, higher trading range from $3.50 – $3.64 ¼. The market settled into that range this week with the approaching three-day weekend in the U.S. and September WASDE discouraging traders from adding risk to their positions.

Monday’s Crop Progress report noted a 2 percent decline in the good/excellent rating of the U.S. corn crop. The decline was within market expectations and held relatively little influence on futures. Most of the Corn Belt experienced a hot, dry August that has impacted yields. This week, several private firms have issued their own yield expectations ahead of the 11 September WASDE report. Most of the yield estimates reflect at least a 0.063 MT/ha (1 bushel/acre) decrease from USDA’s August forecast while some predict a 0.314 MT/ha (5 bushel/acre) decrease.  The September WASDE, and particularly the state yield estimates, will likely be key in determining the market’s direction this fall.

U.S. corn exports have been decidedly bullish heading into the fall. Rising prices in China, driven by flooding, concerns about fall army worms, and stronger feed demand, are prompting the Middle Kingdom to increase purchases from the U.S. Similarly, drought in Ukraine and Europe has cut production in those regions, further tightening international supplies. FOB Black Sea corn prices rallied $5/MT last week and are holding those gains this week while French export maize offers are up $10/MT. Tighter supplies and rising prices for international origins, combined with a weak U.S. dollar, should bode well for the U.S. 2020/21 export program.

From a technical standpoint, December corn futures turned sideways from their trend higher. The market has found solid commercial buying activity on breaks towards $3.52 and the 10-day moving average has also been a notable support point. Trading volumes have decreased each day this week as traders adjust positions but avoid absorbing additional risk ahead of the September WASDE. The market is approaching overbought levels with the relative strength index at 68, which could indicate growing potential for a pullback. If the market moves lower, initial support lies at $3.50 then the open chart gap at $3.41.