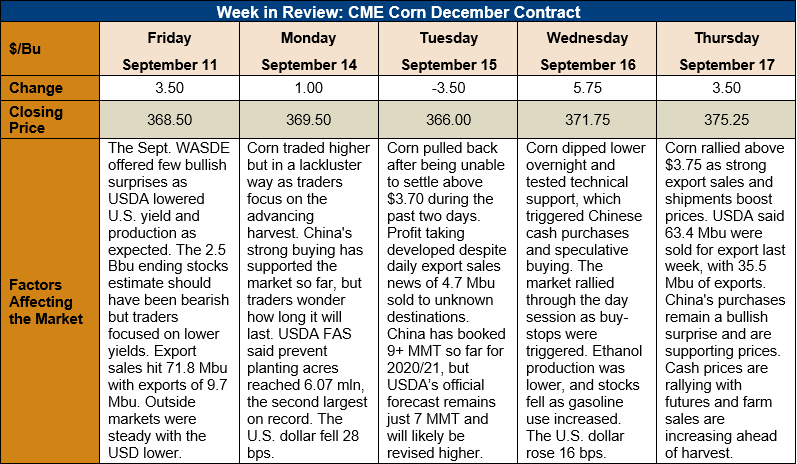 Outlook: December corn futures are 6.75 cents (1.8 percent) higher this week strong international demand for U.S. new crop corn underpins the market. International buyers have not slowed their purchases despite a 50+ cent rally from August to mid-September. China has booked more U.S. corn for 2020/21 delivery than USDA’s current forecast, leading many to expect upward revisions to the U.S. export forecast. In the U.S., the weather remains nearly ideal for the coming harvest and the corn crop will likely finish maturing in above-average condition.

The September WASDE featured the expected reduction in U.S. yields and production. The U.S. 2020 corn yield was pegged at (178.5 bushels/acre), down from the agency’s August estimate of 181.8 BPA. U.S. production was pegged at 378.48 MMT (14.9 billion bushels), down from the August forecast but above 2019/20 production. On the demand side, USDA lowered its expectation of ethanol and feed/residual use of corn by 2.54 MMT (100 million bushels) for each category. Exports were revied 2.54 MMT (100 million bushels) higher to 59.06 MMT (2.325 billion bushels) and ending stocks were lowered to 63.58 MMT (2.503 billion bushels). The agency increased is forecast for the average farm price by 40 cents/bushel to $3.50. The adjustments to the U.S. balance sheet were largely in-line with pre-report expectations and USDA’s numbers were viewed as neutral the futures market.

The weekly Crop Conditions report showed 60 percent of U.S corn rated good/excellent, a 1 percent decrease from the prior week. The U.S. crop is ahead of its normal maturity pace, with 41 percent rated mature in this week’s report, versus 32 percent on average. Five percent of the U.S. crop has been harvested, in-line with the five-year average pace.

The weekly Export Sales report showed another week of large export sales for corn. Net sales totaled 1.609 MMT, down 12 percent from the prior week but still historically large. Weekly exports totaled 0.902  MMT, up 267 percent from the prior week. YTD exports total 1.147 MMT, up 32 percent, while YTD bookings (exports plus unshipped sales) total 20.456 MMT, up 136 percent.

From a technical standpoint, December corn futures are in a strong trend higher with resistance levels being overcome. Buy-stops have been triggered at several key points this week, further accelerating market gains. Thursday’s close above $3.75 is likely to bring additional speculative buying, as well as farm sales and hedge pressure. The market is technically overbought but showing no signs of a reversal or top. For now, the trend (higher) remains the corn market’s friend.