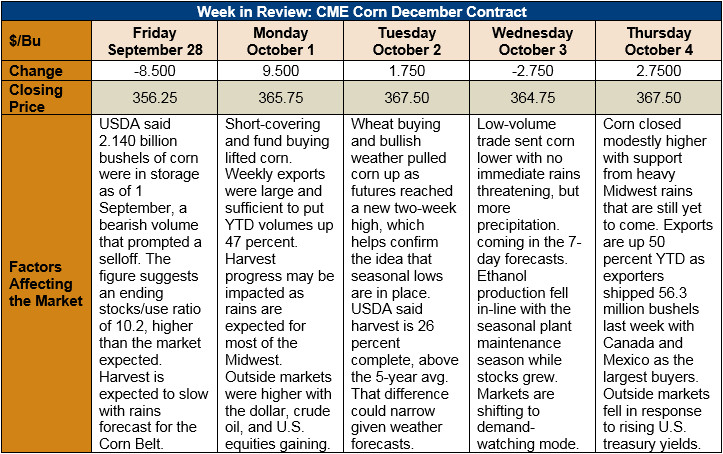 Outlook: December corn futures are up 2.75 cents/bushel this week (up 0.8 percent) as the contract remains largely entrenched in sideways trade. With a large U.S. crop to dampen the marginal effects of relatively modest shifts in global supply/demand, prices are steady. Some bullish influence is exerted by poor Midwest weather forecasts, slow farmer selling, and good export volumes, while the overall supply picture remains bearish.

This week’s USDA Export Sales report featured 1.431 MT of net sales for 2018/19 corn and shipments of 1.408 MMT. YTD exports are up 50 percent while YTD bookings (exports plus unshipped sales) are up 63 percent.  Barely exports are up 59 percent YTD with bookings reflecting a 49 percent increase in purchases.

The U.S. corn crop is rated as 86 percent mature (versus 71 percent on average) and 26 percent harvested (versus 17 percent on average), per the USDA’s report on Monday. Harvest progress may start to slow, however, as persistent and heavy rains are expected across most of the Midwest for the next seven days. Recent weather models show lighter precipitation volumes for parts of Iowa and Minnesota, which could allow more progress to be made in those states.

The slower harvest pace has reduced farmer selling, leaving cash prices relatively stable and more immune from the typically early fall slump. This has led many in the market to believe the 2018 seasonal low price has already been established for both cash corn and corn futures. As such, the market will largely turn to watching demand for guidance as to future market direction.

From a technical standpoint, December corn futures are above several key moving averages, which signals more bullish potential. The break above $3.60/bushel, however, has come with light trading volume, leaving less assurance that current prices will be maintained. Funds are estimated to be short 102,000 contracts of corn and have likely been covering this position in light of the poor weather and strong export demand. For now, December corn looks relegated to maintaining its sideways pattern until more is known about supply/demand fundamentals.