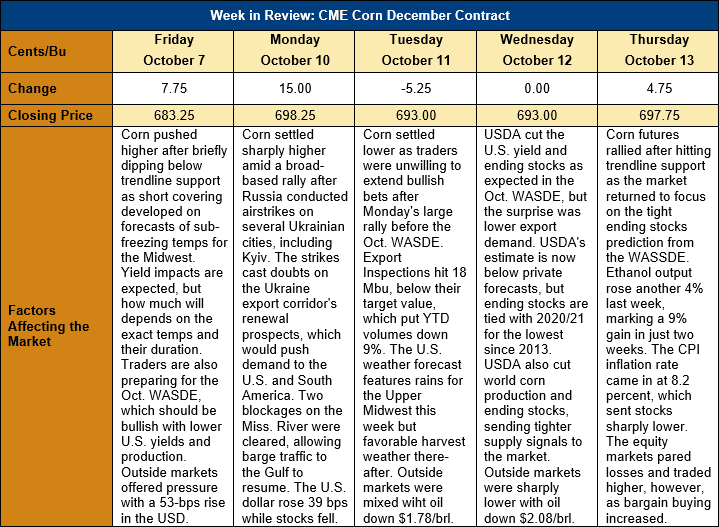 Outlook: December corn futures are 14 ½ cents (2.1 percent) higher than last week after Monday’s airstrikes by Russia on major Ukrainian cities created a grain market rally on the same day. After one day of sideways trade, the USDA’s October WASDE was bullish corn and wheat, which led to late-week strength in futures. With the WASDE’s implications now priced into futures values, traders and analysts will turn their attention to any possible issues with the Northern Hemisphere harvest and U.S. and world export trends.

The USDA’s WASDE report was largely in-line with expectations as the agency lowered the 2022 U.S. corn yield to 10.79 MT/ha (171.9 bushels/acre) and put the total crop at 352.95 MMT (13.895 billion bushels). Both figures were in-line with pre-report expectations and offered little surprise. The smaller crop, combined with the smaller-carry-in implications of the September Grain Stocks report meant that 2022 U.S. supplies fell 1.1 percent from the September WASDE and are down 6.2 percent from 2021/22.

On the demand side, USDA increased feed and residual use by 1.27 MMT (50 million bushels) based on the consumption patterns evidenced by the recent Grain Stocks data. USDA lowered ethanol use of corn by 1.27 MMT (50 Mbu) based on recent grind rates and the EIA’s 2023 energy outlook. USDA also cut its forecast of U.S. 2022/23 exports by 3.18 MMT (125 million bushels) to 54.61 MMT (2.150 billion bushels). USDA’s assessment of U.S. export potential is lower than that of many private firms, however.

Outside the U.S., the USDA cut Europe’s corn yield by 0.2 MT/ha to 6.32 and lowered the region’s 2022 production by 2.6 MMT to 56.2 due to the impacts of drought and extreme heat this year. USDA left the supply-side of Ukraine’s corn balance sheet essentially unchanged but increased the country’s 2022/23 exports by 2.5 MMT to 15.5 MMT. For the world balance sheet, USDA cut global corn production by 3.8 MMT for 2022/23 and lowered ending stocks by 3.3 MMT. The implications of the October WASDE was smaller production and ending stocks in the U.S. and the world for the 2022/23 marketing year.

The U.S. harvest continues to advance with only minor delays in a few states. On Tuesday, USDA reported that 87 percent of U.S. corn is now mature, and 31 percent has been harvested. Recent cool temperatures and rains in the Upper Midwest have caused slight delays but the weather outlook for the next two weeks remains favorable.

The Mississippi River is still suffering from low water and draft levels that are hampering grain movement by barge. Progress was made early this week, however, as the U.S. Coast Guard announced two blockages had been cleared. This has improved logistics and barge rates are starting to fall. Offers for U.S. grain exports from the Gulf are now more readily available and the fall export program is expected to pick up quickly.

From a technical standpoint, December corn futures continue to trend higher and made a bullish move above resistance at $7.00 on Monday. The contract has broken a downtrend resistance line that was in place since May, but follow-through buying has been somewhat limited. With the WASDE pointing to smaller production and ending stocks this year, corn futures are likely to start their seasonal grind higher very soon.