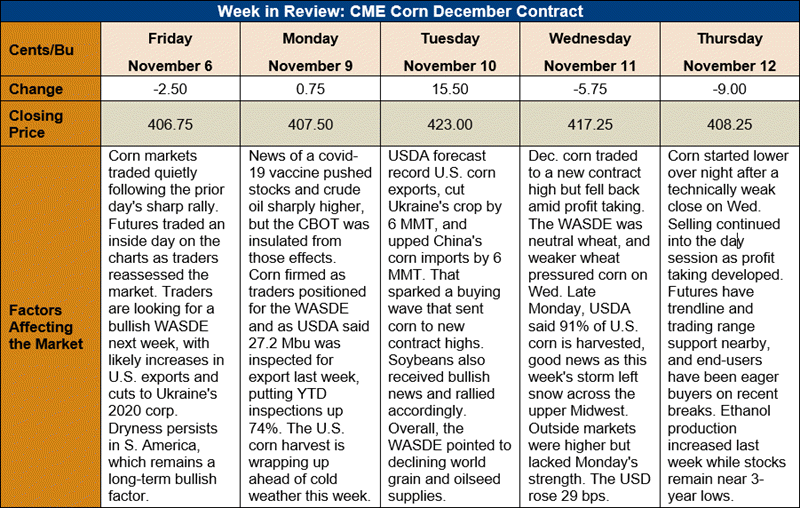 One of the biggest surprises in the November WASDE was USDA’s reduction of the 2020 U.S. corn yield. The agency estimated the yield at 11.03 MT/ha (175.8 bushels/acre), which was below market expectations. The 2020 U.S. crop was estimated at 368.5 MMT (14.507 million bushels), which was also below pre-report estimates.

On the demand side, UDSA forecast record large U.S. corn exports, based on strong international demand. U.S. corn export for the 2020/21 marketing year are forecast at 67.3 MMT (2.65 billion bushels), based partly on large export bookings and a 6-MMT increase in China’s corn import forecast. USDA now estimates China will import 13 MMT of corn in 2020/21.

The combination of lower yield and production figures and a record-large export program pulled USDA’s 2020/21 U.S. ending stocks estimate below the low end of analysts’ pre-report estimates. USDA estimated 2020/21 ending stocks at 43.233 MMT (1.702 billion bushels), which implies an 11.4 percent ending stocks-to-use ratio. That figure would be the lowest since 2014/15, if realized, and was the justification for USDA increasing the marketing year average farm price to $4.00/bushel.

USDA’s world production cuts were coupled with a modest reduction in global feed use and a slight increase in global trade. Those adjustments helped lower 2020/21 world ending stocks by 9 MMT to 291.4 MMT. That equates to a 21.8 percent global ending stocks-to-use forecast, which would be the lowest since 2013/14 if realized. Overall, the November WASDE highlighted tighter supplies for global corn and feed grain supplies, coupled with rapidly strengthening demand.

USDA’s Export Sales report is delayed due to Wednesday’s U.S. holiday, but the weekly Export Inspections report showed 690,000 MT of corn was inspected last week. That volume is 7 percent below the prior week’s figure but enough to keep YTD inspections at 7.576 MMT, up 74 percent. Sorghum inspections fell slightly from the prior week, but YTD inspections are up 79 percent.

The 2020 U.S. corn harvest was 91 percent was harvested as of Sunday night. U.S. farmers have made quick progress this year, which was fortunate as snow and cold weather entered the upper Midwest this week. With the harvest largely concluded, there are minimal supply-side risks remaining and the market’s attention is now turning solely to demand.

Strong export demand is keeping cash corn prices and basis levels firm as elevators and exporting firms compete for grain. Basis levels along the Illinois River and in western Kansas hit five-year highs this week. The average price for corn across the U.S. is $156.63/MT ($3.98/bushel) this week, with the average basis firming to 19 cents under December futures (-19Z). The U.S.-average basis this time last year was -38Z.

From a technical standpoint, December corn futures formed a hook reversal on Wednesday as the market struggled to gain traction above the old contract high at $4.24. That technical development created weaker overnight trade Thursday that continued into the day session. December corn found support at $4.06 and still has trendline support at $4.02 and trading range support at $3.93. Since August, pullbacks have continually uncovered strong end-user buying interest and that is likely to be the case again, especially with technical support nearby.