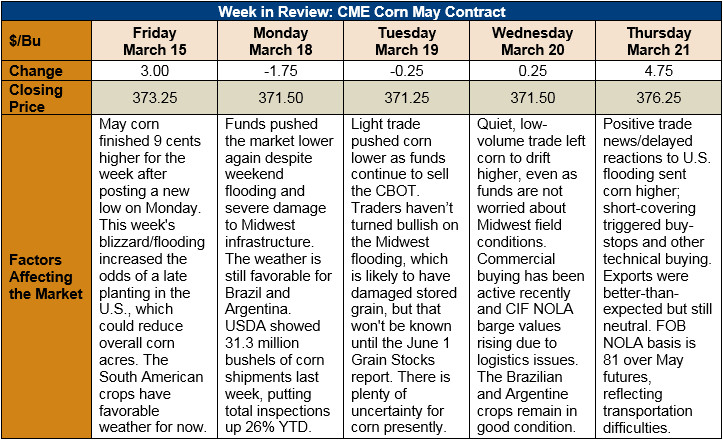 Outlook: May corn futures are up 3 cents/bushel (0.8 percent) from last Thursday as the market bounces back from its recent selloff. The driving force behind this week’s pricing strength in corn is the increasing probability of a late planting season in the U.S., combined with the possibility for an uptick in exports later this spring.

USDA’s weekly Export Sales report featured net sales of 855 KMT, a figure which beat market expectations. Weekly shipments of 764 KMT were a 3 percent increase over the prior week and brought YTD shipments to 27.8 MMT. YTD bookings (unshipped sales plus exports) stand at 41.7 MMT, a 7 percent decrease from this time last year. Other notable figures from the report were 200 MT of barley exports and another 10 KMT of sorghum shipments.

The U.S. Midwest remains largely cold and wet and, despite some drier weather next week, looks to continue that pattern into April. Parts of the Midwest, including Nebraska, Iowa, and Missouri, have experienced significant flooding due to rains and runoff from snowmelt in other parts of the U.S. While planting isn’t delayed presently, the current conditions and weather forecasts suggest it will likely become delayed in the near future. If the planting is delayed, some farmers will switch some acreage from corn to soybeans, which could further tighten U.S. corn ending stocks heading into next year.

The Midwest flooding is creating logistics issues, especially along the Mississippi river. Barge rates have been increasing, as have bids for corn CIF New Orleans in barges. U.S. farmer selling has been light in recent weeks due to the logistical challenges, and the U.S. average corn price is up 1 percent from last year at $135.33/MT ($3.44/bushel).

Additional market support is coming from positive news on the trade negotiation front. While details are limited, both China and the U.S. have indicated that positive progress is being made. While still tentative, China has agreed to purchase substantial quantities of U.S. agricultural products, including corn and DDGS, which would be supportive for U.S. prices – especially if 2019 acreage is reduced due to weather. While there is much still uncertain about a possible deal, traders are interpreting comments as positive for trade and prices.

From a technical standpoint, managed money funds posted a record large short position for data ending the week of 12 March while commercials were eager buyers as prices fell. Corn prices were pressured as funds sold contracts aggressively, but now those shorts are quickly being covered as U.S. planting is increasingly at risk of delays, and as trade negotiations seem to be making progress. Consequently, there is increasing upside potential for the market. Futures face some technical resistance in the near-term but are likely to return to the trading range which they held for most of January and February. For December futures, this would mean prices at or slightly above $4.00/bushel.