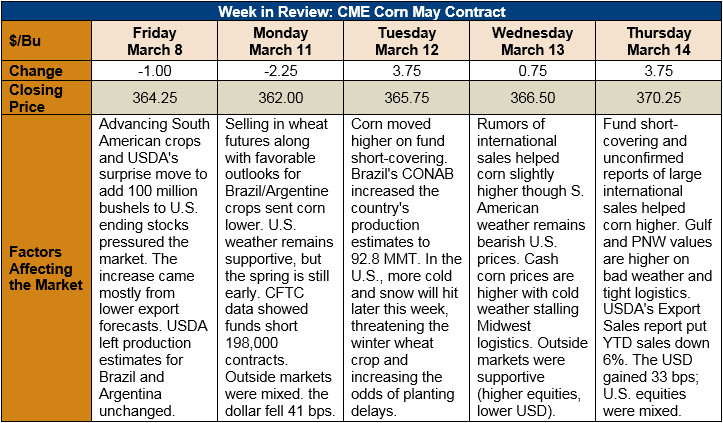 Outlook: May corn futures are 6 cents (1.6 percent) higher this week as Monday’s new contract low led the way for a mild round of fund short-covering. Funds were active sellers last week on wheat weakness and continued good weather across South America. The 8 March WASDE was slightly bearish U.S. corn but, as expected, was not a major market-moving report. Going forward, the corn market looks to be driven by South American weather/production/export forecasts, U.S. export prospects, and the odds of a late planting in the U.S.

The March WASDE saw USDA make relatively few changes to the 2018/19 U.S. corn balance sheet. The agency reduced its forecast for corn used in ethanol production by 0.4 percent while dropping the U.S. export forecast 3.1 percent. Because of those changes, USDA added 2.54 MMT (100 million bushels, or 5.8 percent) to U.S. ending stocks.

Elsewhere in the WASDE, USDA increased its expectations for Feed and Residual use of sorghum by 16 percent. The agency reduced Food, Seed, and Industrial use by 54.5 percent and decreased the U.S. export forecast 15 percent. In total, the agency left ending stocks unchanged as domestic feed use increases are expected to outweigh the slow export pace. The USDA lowered barley imports by 20 percent, which translated to a 2.2 percent reduction in 2018/19 barley ending stocks.

The South American corn crop remains under favorable weather forecasts and government agencies there are increasing their expectations for 2018/19 production. Brazil’s CONAB raised the country’s corn crop to 92.8 MMT while Argentina is expected to peg its crop near 42.4 MMT this month, versus 46.5 MMT last month. The good crops in South America could hamper U.S. exports, but U.S prices are currently very competitive on an FOB basis.

The USDA’s weekly Export Sales report featured 0.646 MMT of sales this week and 0.372 MMT of net sales. Both figures were down from the prior week. Exports last week reached 0.786 MMT, up 26 percent from the prior week. YTD bookings (exports plus unshipped sales) are down 6 percent. The report also featured 9.7 KMT of sorghum exports and 200 MT of barley exports. Barley bookings are up 14 percent YTD.

One factor that remains medium-term supportive for the corn markets is the increasing potential for a late-planted corn crop. The U.S. Midwest has been mired in cold, wet weather this winter/spring that could result in farmers being delayed for field work. U.S. farmers are amazingly adept at getting large areas of land planted quickly when given the window, so few agencies are lowering their planted acreage forecasts so far. However, should the poor weather continue into late March and April, the odds increase that planting will be delayed, and some acreage could switch to other crops. However, it is too early to suggest to what extent that may be.

From a technical standpoint, May corn futures are in a downtrend but have found support at a new contract low and are rallying from there. Funds hold a massive short position in corn, and most other CBOT ag products, that could result in higher prices as they decide to cover those positions. Commercial traders have been active buyers on the break, which has offered some support to the market. The odds for improved geopolitical relations/exports should be a bullish consideration as well.