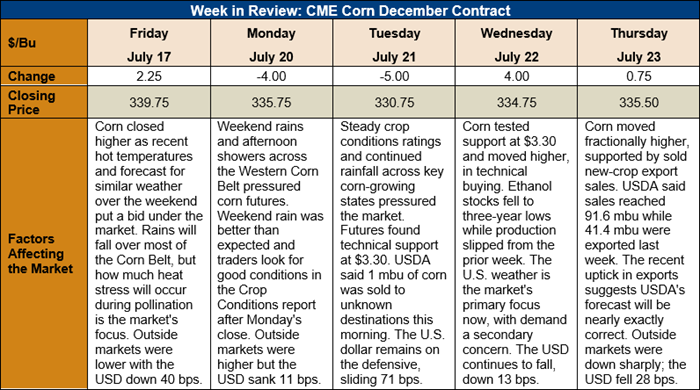 Outlook: December corn futures are 4 ¼ cents (1.3 percent) lower this week after early week selling pressure encountered strong technical support. Funds have been net sellers, but only lightly so as hot weather across the Midwest during the final stages of corn pollination is keeping the market on edge. Stronger exports have been supporting the market as well and cash prices remain largely steady.

Despite hot temperatures late last week and over the weekend, USDA reported that, as of Sunday, 69 percent of the U.S. corn crop is in good/excellent condition. The figure was unchanged from the prior week and put the corn crop at the fourth highest rating in the past 10 years. While temperatures were hot, consistent and meaningful rains across key corn-producing states helped crop ratings hold steady. USDA reported 59 percent of U.S. corn was silking (ahead of the five-year average of 54 percent) while 9 percent was entering the dough stage (up from the average of 7 percent). USDA also noted sorghum and barley conditions improved, with 51 and 75 percent of the respective crops rated good/excellent.

From a technical standpoint, the selling pressure that developed Monday and Tuesday found strong technical support at $3.30 that stopped the selloff. Support at $3.30 was sufficient to prevent sell-stops from being triggered below that point, which can be viewed as a technical win for corn bulls. The market’s firmness Wednesday and Thursday suggests a test of trading range resistance ($3.40) may be in the works.

Looking forward, while most of the U.S. corn crop has pollinated with favorable weather, the current warm weather forecast is apt to keep selling pressure at bay for a few more weeks. Moreover, rising corn prices in China, combined with recent strong export sales, are potentially indicating stronger-than-expected demand early in the 2020/21 marketing year. December corn is likely to hold its current trading range and potentially move higher while the market assesses this new demand information.