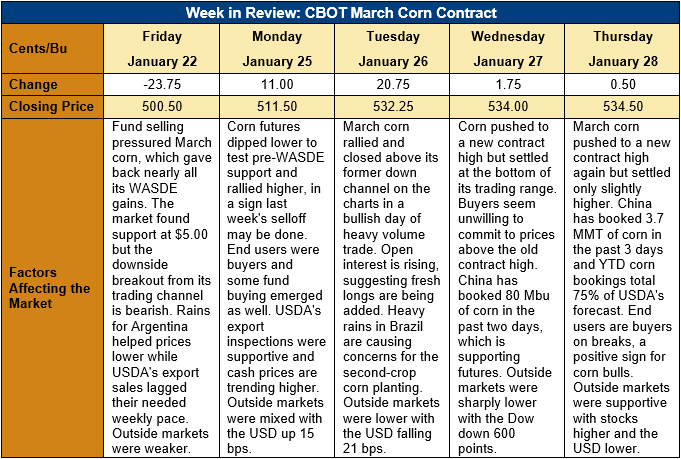 Outlook: March corn futures are 34 cents (6.8 percent) lower this week as last week’s pullback sparked commercial and end-user buying along with renewed speculative long interest. One hallmark of bull markets is that pullbacks find strong support and are able to rally to new highs. Thursday’s rally to a fresh contract high at $5.50 in March futures is certainly a sign of market strength.

The weekly Export Sales report from USDA featured 1.85 MMT of net sales, up 29 percent from the prior week and well above the five-year average for late January. Weekly exports rose to 1.414 MMT  – the second highest weekly shipment pace of the marketing year – bringing YTD exports to 19.021 MMT. YTD shipments are up 81 percent while YTD bookings (exports plus unshipped sales) are up 126 percent at 48.670 MMT. Notably, roughly four months into the 2020/21 corn marketing year, YTD bookings account for 75 percent of USDA’s 64.7 MMT export forecast, and YTD shipments 42 percent of the agency’s projection.

China remains a significant buyer of U.S. corn, with USDA issuing a daily export sales announcement for Chinese corn purchases each of the past three days. USDA only issues daily export sales announcements when commodity purchases by a single country exceed 100,000 MT. Since Tuesday, China has booked 3.74 MMT (147.2 Mbu) of corn as reported in USDA’s daily announcements. Notably, the USDA Foreign Agricultural Service attaché in Beijing expects China to import 22 MMT of corn this year (above USDA’s official forecast of 17.5 MMT) while one large grain trading firm says it sees China importing 25 MMT in 2020/21 If either of these projections is true, it suggests the U.S. corn export program will continue to break records and support the ongoing market rally.

U.S. farmers are thought to have sold some 85 percent of the 2020 corn crop, taking advantage of the futures rally and historically firm basis. That farmers have sold so much already suggests cash selling pressure on future rallies will be limited. Cash prices average $203.04/MT ($5.16/bushel) across the U.S. this week, up 7 percent from the prior week and up 40 percent from this time last year. The average basis level is at a five-year high for the end of January, averaging 18 cents under March futures.

Updated long-term weather forecasts show the existing strong La Nina persisting into April. That trend suggests the U.S. Corn Belt may see a drier-than-normal spring. Drought conditions have been expanding across the U.S. this winter, with extreme drought in the Southwest creeping into the northern Plains states and the western edges of the Corn Belt.

In South America, the La Nina weather event suggests central and eastern Brazil will likely remain dry, potentially impacting the safrinha corn crop. Similarly, Argentina’s weather tends to be drier during La Nina years, thought the extremely dry start to the country’s summer appears to have faded. Despite generally dry conditions, southern Brazil and Paraguay have received excess rainfall in recent weeks, which is delaying the soybean harvest. If the rain continues, there is potential that the region’s safrinha corn crop planting will also be delayed. The forecast for La Nina to continue into the spring suggest world crops are far from done with weather risk.