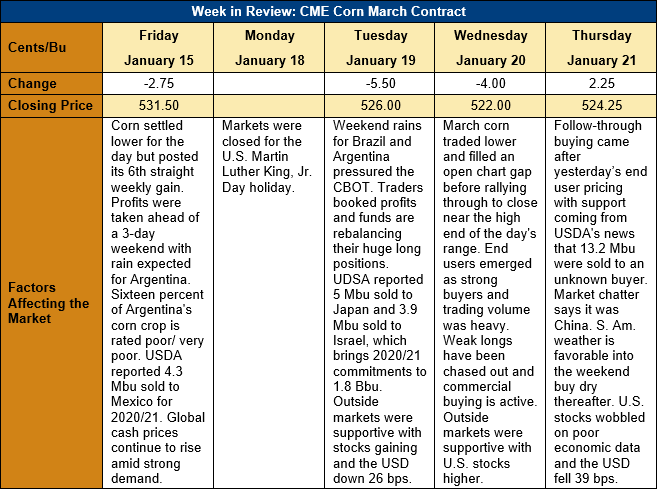 Outlook: March corn futures are 7 ¼ cents (1.4 percent) lower this week after the market pulled back from overbought extremes. Funds were modest net sellers and weak longs booked profits as it became clear that post-WASDE follow through buying would be limited. On Wednesday and Thursday, end-users emerged to price Q1 and Q2 needs on the break, offering support to the futures market. Corrections of 5-8 percent are not uncommon during bull markets and this week’s pullback is being viewed as a minor rebalancing amid what is likely to be a sustained trend higher.

The weekly Export Sales report from USDA is delayed one day due to a U.S. holiday this past Monday, but the weekly Export Inspections report was friendly for grains. Corn inspections fell from the prior week and were on the low end of expectations, but the fact YTD shipments are up 82 percent was a supportive factor. Sorghum inspections were 20 percent higher from the prior week as China once again emerged as a major buyer. Sorghum YTD inspections total 2.6 MMT, up 167 percent from this time last year.

The La Nina weather event is still present in the Pacific Ocean and is not expected to fade until March. Typically, that tends to keep Brazil and Argentina dry during the critical stages of corn yield development. Weather in the past two weeks, however, has been variable with a mostly dry pattern fading and allowing meaningful rainfall to develop this past weekend. This week’s weather has been mostly dry and, except for a weak system expected this weekend, the next two weeks look dry as well. Day time temperatures will be below average, lowering soil moisture demand, but will still be warm enough to stress reproductive corn fields. Dryness in Argentina was a major catalyst for the current bull market in corn and it seems likely that this similar weather trend will continue pushing futures higher.

U.S. cash corn prices are slightly lower this week as prices above $5.00/bushel sparked some farmer selling. The average price across the U.S. is near $198.15/MT ($5.03/bushel) with basis weakening to 19 cents under March futures. Basis remains just shy of its five-year highs for mid-January that were set in 2020. With a record-large export program forecast for the U.S., basis is likely to remain firm and end users will have to be aggressive on breaks.

From a technical standpoint, March futures marked an important development on Wednesday by trading lower and filling the open chart gap left by the 13 January opening. After the market filled the gap and found support near the 10-day moving average, it settled at the gap’s top ($5.22) in a moderately bullish development. Open interest in corn futures increased on Wednesday as end user pricing and bargain hunting led to active trade against funds lightening up on long positions. Three days of declines and trade below the highs set on the day the January WASDE was released have chased out many weak longs, which should allow the market to stabilize and move higher again. One lingering bearish factor is that March future are still overbought, however, with the Relative Strength Index at 81 percent (a neutral market has an RSI below 70). Regardless, the fundamentals lean bullish corn and future breaks are likely to be buying opportunities.