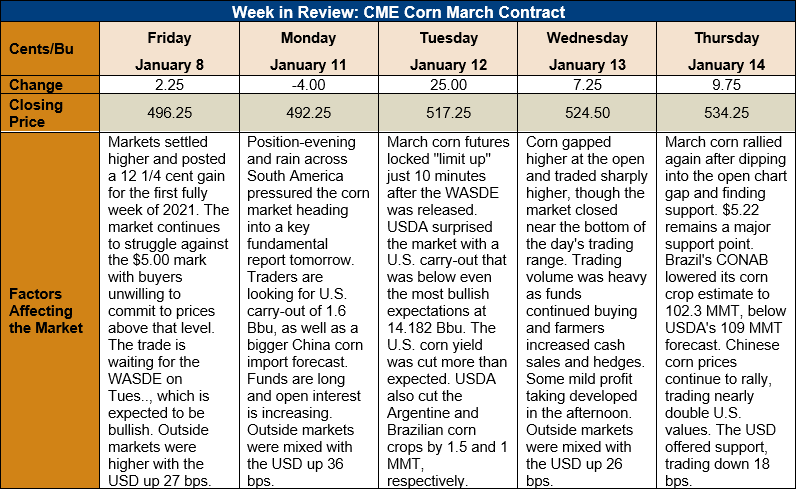 Outlook: March corn futures are 38 cents (7.7 percent) higher this week after a bullish January WASDE. Open interest in the futures market has been growing as speculative traders add to long positions and farmers become more aggressive with 2021 hedges. The futures rally remains supported by rising cash prices in the U.S. and around the world as markets look to star rationing demand.

The January WASDE was expected to produce volatility and it did not disappoint. USDA lowered both U.S. and world 2020/21 ending stocks after cutting its U.S. 2020 production estimated as well as the forecasts for Argentina and Brazil’s crops. Ending stocks forecasts were below pre-report expectations, giving the report a decidedly bullish interpretation.

On the demand side of the balance sheet, USDA made some surprising cuts, including a 1.27-MMT reduction to feed and residual use. That adjustment came despite the fact the 1 December corn stocks estimate suggests record-high feed use during the first quarter of the 2020/21 marketing year. Due to covid-19 related reductions in gasoline consumption, USDA lowered its forecast of corn use for fuel ethanol by 2.54 MMT to 125.74 MMT. USDA also lowered its corn export forecast by 2.54 MMT to 64.77 MMT.

Internationally, USDA cut Argentina’s 2020/21 corn production forecast by 1.5 MMT to 47.5 MMT due to ongoing drought in the country’s agricultural region. Similarly, Brazil’s 2020 corn crop estimate was cut 1 MMT to 109 MMT. The cut was based on lower yield expectations for the country first-crop corn, particularly in the southern portion of the country. In total, USDA cut 9.6 MMT from the global corn crop.

Global corn imports were forecast down 3.29 MMT as USDA expects smaller import programs for the EU and Mexico, among several other countries. Notably, USDA increased its forecast of China’s corn imports by 1 MMT to 17.5 MMT, due to the country’s large bookings for the 2020/21 marketing year.

Due to the strong pace of U.S. sorghum exports this year, USDA increased its forecast by 0.381 MMT to 7.36 MMT. The agency increased the 2020 crop slightly to 9.475 MMT based on higher harvested acreage that offset a modest yield reduction. USDA made a modest cut to food, seed, and industrial sorghum use, which when combined with the above changes, cut U.S. 2020/21 ending stocks by 0.5 MMT to 0.711 MMT. The agency increased its price expectation for this year’s crop to $185.03/MT ($4.70/bushel).

U.S. cash prices continue to rally in tandem with the futures market and strong export demand. Interior prices are up 5 percent this week to $199.23/MT with basis widening slightly to 18 cents under March futures (-18H). Last week’s U.S.-average basis was -15H. Barge CIF NOLA and FOB NOLA offers are 5 percent higher this week, trading at $236.75/MT and $253.82/MT, respectively.

From a technical standpoint, March corn futures posted two major bullish developments this week. The first was Tuesday’s close above $5.00, a level that had been significant resistance for bulls. The second was Wednesday’s gap-higher open and settlement above $5.22, which was a major resistance level on the continuous active chart. Heavy trading volume both days (though post-WASDE trade was limited as the market locked at its limit bid) helps confirm a higher outlook. The market is deeply overbought and due for a correction, but this week’s trade suggests that may not happen soon. Markets are focused on rationing demand and until evidence of that appears, the trend will remain higher.