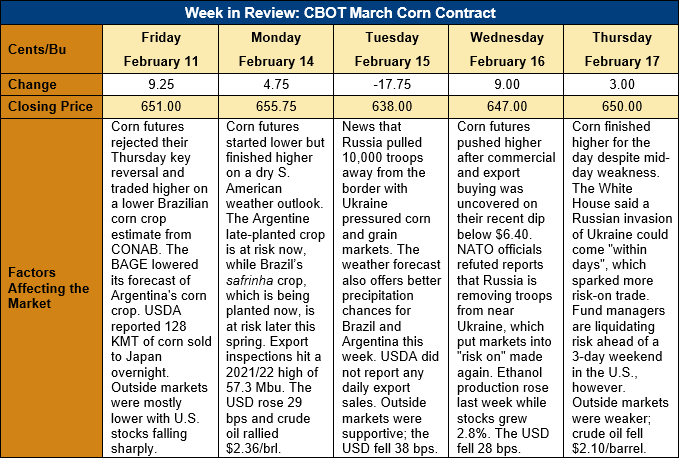 Outlook: March corn futures are 1 cent (0.2 percent) lower this week after back-and-forth political developments in the Black Sea and shifting South American weather forecasts buffeted markets. Corn futures have chopped sideways this week with little indication of a trend developing in either direction. Further contributing to the sideways chop is the fact that some traders and fund managers are liquidating risk ahead of a long weekend with U.S. markets closed Monday, 21 February in honor of the President’s Day holiday.

Early week news reports from the Black Sea suggested Russia was removing troops, which pushed corn futures lower, and it seemed the corn market would follow through on its post-WASDE key reversal. The most recent updates from Ukraine and the White House, however, suggest Russia may have added troops along the Ukrainian border, which created another round of “risk on” trade on Thursday. At issue for the grain markets is the possibility that sanctions against Russia could restrict grain exports from the country, as could naval activity in the Black Sea.

South American weather patterns continue to influence CBOT markets with drought in Argentina threatening the soybean and late-planted corn crops. Similarly, hot, dry weather in southern Brazil is causing concern for planting the safrinha corn crop, as well as its early development. Until recently, the long-run weather forecasts favored a shift towards more precipitation and moderate temperatures for centra/southern Brazil and Argentina starting in March. Now, forecasts predict the ongoing La Nina will keep a hot, dry weather trend in place into April. Market Perspectives readers may recall that last year’s La Nina brought significant drought to Brazil and resulted in a 19 percent reduction in the safrinha crop and cut Brazil’s total corn production to 87 MMT, 15 percent below 2019/20 levels. Corn futures remain elevated in response to the outlook for problematic weather in Brazil.

The trade is looking forward to the USDA’s annual Ag Outlook Forum next week, at which the agency will present its first look at the 2022/23 U.S. crop balance sheets. Key numbers from the meeting will be the corn and soybean acreage estimates, which could shape the market’s direction heading into the March Prospective Plantings report.

U.S. exporters recorded net sales of 0.82 MMT of corn last week, up 39 percent from the prior week, and shipped 1.617 MMT of corn. The export volume was up 41 percent from the prior week and put YTD exports at 22.332 MMT, down 3 percent. YTD bookings (exports plus unshipped sales) now total 46.5 MMT, down 21 percent, and account for 75 percent of USDA’s forecast with roughly six months left in the 2021/22 marketing year.

From a technical standpoint, March corn futures are still trending higher, even though this week’s trade has been decidedly sideways. The market has not followed through on last week’s bearish key reversal and a dip below $6.40 this week uncovered solid commercial buying and export interest. The contract high ($6.62 ¾) remains the upside target while support lies at $6.40, the 40-day moving average at $6.17, and the supporting trendline at $6.11.