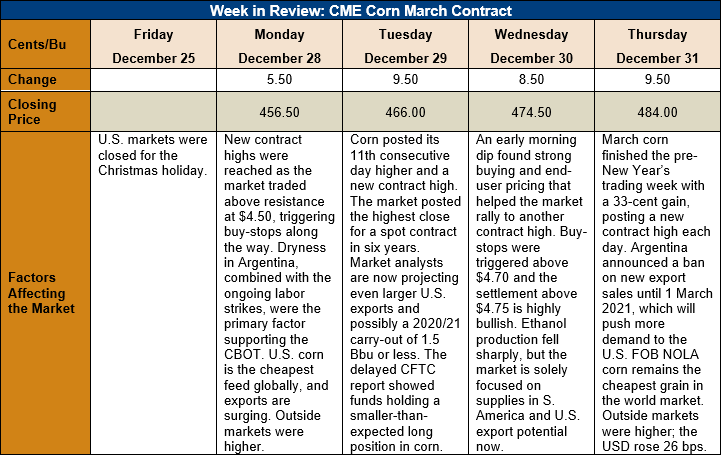 Outlook: March corn futures have rallied sharply since the last Market Perspectives report, rising 51 ½ cents (11.9 percent) since then. Thirty-three cents of that total gain came this week, marking a highly unusual rally during a week that, historically, is defined by quiet trading. March corn futures have posted new contract highs in each of the last eight trading days. The rally has been sparked by several factors, including Argentina’s drought and recent export restrictions, fund buying, and continued strength in U.S. corn demand.

Rainfall in Argentina’s corn and soybean belt has been below-average so far this growing season, due to the strong La Nina weather event. The lack of rainfall has pushed early-planted corn condition ratings below average, with 17 percent of the early crop rated good/excellent conditions, behind last year’s 35 percent rating. The Argentine crop is entering pollination with dry soil conditions and little rain in the forecast for the next two weeks. Fortunately, weather forecast suggests temperatures will be near or below average, and the absence of excessive heat will be welcomed by farmers.

The ongoing strikes affecting Argentina’s exports combined with dryness in the corn growing-region prompted the government to ban new export sales of corn until March 1, 2021. The move was stated as an effort to ensure adequate domestic demand and will likely push significant volumes of what would have been Argentine corn demand to the U.S. U.S. FOB NOLA offers are below those of other major exporting countries/regions (e.g., the Black Sea, South Africa, or Brazil), which makes U.S. export gains exceedingly likely.

Even before the Argentine government blocked new export sales, U.S. exporters were continuing to increase business. The weekly Export Sales report showed 1.085 MMT of gross sales last week, with net sales up 48 percent from the prior week. Exports hit a marketing year high of 1.339 MMT (up 60 percent from the prior week) and put YTD exports at 14.228 MMT. YTD bookings (exports plus unshipped sales) stand at 43.195 MMT (up 135 percent YTD).

One reason the CBOT rally has been so strong is that farmer selling has been limited in both the U.S. and Brazil. U.S. farmers are thought to have already sold some 74 percent of the 2020 corn crop, most of which occurred before the December rally. Farmers are now content to watch the rally and slowly part with what remains unsold. In Brazil, farmers are waiting for better clarity on growing season weather before extending sales of the 2020/21 crop. Brazilian farmers have sold some 50-60 percent of the coming crop.

From a technical standpoint, March corn futures are trending higher, posting new contract highs with each passing day. Funds have been aggressive net buyers but still have room on their books to add more. The market is extremely overbought with the Relative Strength Index (RSI) at 79.38, which suggests a correction may be coming soon. However, given the increasingly bullish fundamentals, any pullback is likely to be used as a buying opportunity for end-users and speculators looking to get long.