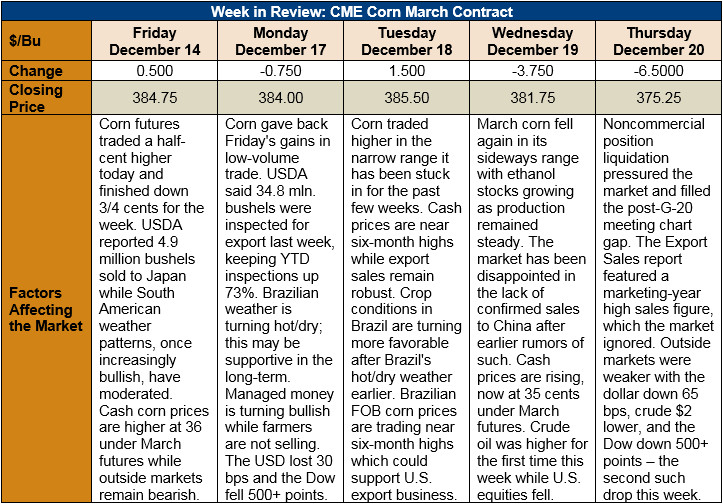 Outlook: March corn futures are 9 ½ cents (2.5 percent) lower this week as bears have been aggressive sellers on rallies. Fundamental news has been somewhat light, as is typical for this time of year, leaving the market to lean more heavily on technical indicators for direction. Still, some demand-side fundamentals remain supportive for the contract going forward.

The monthly Cattle on Feed report offered support for corn consumption this week. The former report noted on-feed inventories are up 2 percent from last year and were slightly above analysts’ expectations. Similarly, the number of cattle placed on feed in November (therefore consuming corn for the next 3-6 months) was nearly 2 percent higher than the average pre-report analyst’s estimate. With larger cattle supplies across the Midwest, feed consumption should remain robust through the spring.

The weekly Export Sales report featured 1.97 MMT of net sales for 2018/19 and 0.975 MMT of shipments – a marketing year high for sales that was driven by aggressive purchases from Mexico. The weekly shipment figure was 2 percent higher than the prior week while YTD exports remain 76 percent higher than the prior year. The report also showed 2.9 KMT of barley exports which puts YTD shipment totals for that crop up 41 percent.

Cash corn prices in the U.S. are trending higher amid strong export demand and quiet farmer selling. Futures have been unable to sustain a significant rally since November’s G-20 meetings, but cash basis levels have strengthened substantially. Cash corn prices averaged $136.54/MT ($3.47/bushel) this week, up 10 percent from this time in 2017.

From a technical perspective, March corn is range-bound with noncommercial selling (and, today, pre-holiday position liquidation) capping rallies and aggressive commercial purchases supporting breaks. The contract fell below moving average support today but has a trendline below $3.72 ¼ – a point which is likely to be significant support. The market faces minor resistance at $3.88 and major resistance at the 200-day MA ($3.92). Look for the market to test trendline support in the coming days then, if that point holds, to move back to $3.83 and resume a sideways trend.