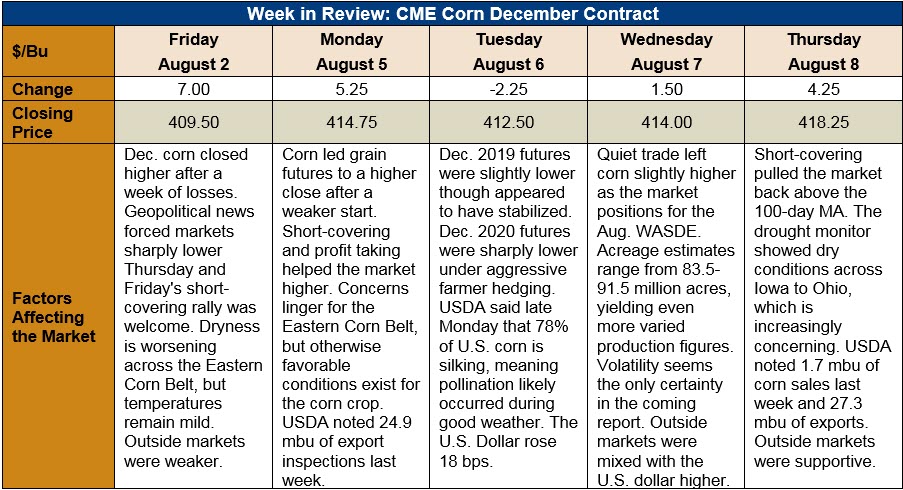 Outlook: December corn futures are up 8 ¾ cents (2.1 percent) this week as CBOT markets recover from oversold technical conditions. The August WASDE now has the market’s full focus and pre-report positioning has been notable. Estimates for the report are wide-ranging and there is growing sentiment that the report could produce significant volatility in the futures market.

On Monday, USDA said 57 percent of U.S. corn was in good/excellent shape, down from the five-year average of 69 percent. Seventy-eight percent of U.S. corn is silking, behind the typical pace of 93 percent, which suggests most of the crop pollinated during favorable weather conditions. Dryness across the Eastern Corn Belt is growing and should be watched, but the critical time for the corn crop’s development has seemingly passed without incident.

USDA’s weekly Export Inspections report featured net sales of 95,200 MT and exports of 692,600 MT. The export figure was down 2 percent from the prior week and less than needed to keep pace with USDA’s latest export forecast. YTD exports are down 11 percent while YTD bookings are 17 percent less than last year. USDA also noted that 9,600 MT of sorghum was exported last week.

U.S. cash prices are slightly higher across the Midwest this week with the average price moving 2 percent higher to $156.50/MT. Barge CIF NOLA and FOB NOLA corn prices are higher with Gulf export offers reaching $186.75/MT, an increase of 2 percent from the prior week. FOB NOLA prices are 7 percent higher than this time in 2018.

From a technical standpoint, December corn is moving sideways/higher after moving sharply lower last week. A combination of short-covering and commercial buying has supported this week’s price action. The market is looking for USDA’s acreage and yield estimates in the August WASDE, however, and next week’s fundamentals will overrule current technical conditions. Pre-report estimates are extremely varied for the U.S. corn crop, however, virtually assuring that the coming WASDE will be actively watched and traded.