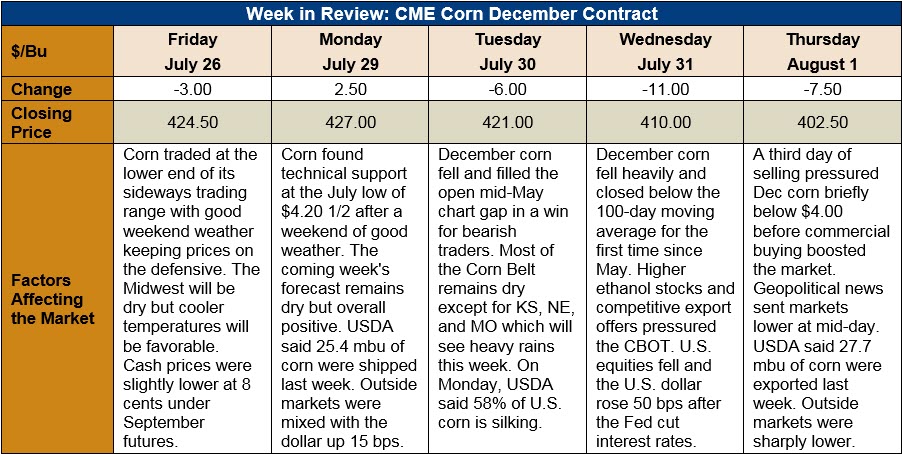 Outlook: December corn futures are down 22 cents (5.2 percent) this week in sympathy with widespread price weakness in CBOT ag markets. Technical selling and position liquidation have been featured as well, which kept prices on the defensive. Traders point to the odds of better-than-expected corn yields as a bearish influence, despite the odds that USDA will cut its acreage forecast in the August reports.

On Monday, USDA said 58 percent of U.S. corn was in good/excellent shape, down from the five-year average of 71 percent and at its lowest in at least 5 years. Fifty-eight percent of U.S. corn is silking, behind the typical pace of 83 percent, which means the majority of the crop will pollinate with a broadly favorable weather forecast. Indeed, reports from farm country suggest that the crop looks better than expected given the extremely late planting. Those reports have some commodity analysts increasing their yield forecasts closer to USDA’s 166 BPA estimate. The market has already priced in its own estimate of corn acres, and now both yield estimates are creeping higher and pressuring futures.

USDA’s weekly Export Inspections report featured net sales of 143,100 MT and exports of 704,100 MT. The export figure was up 22 percent from the prior week but less than needed to keep pace with USDA’s latest export forecast. YTD exports are down 8 percent while YTD bookings are 16 percent less than last year. USDA also noted that 400 MT of sorghum was exported last week along with 1,800 MT of barley.

Internationally, recent heatwaves and dryness across Europe prompted the USDA Foreign Agricultural Service (FAS) attaché in the region to cite concern for the crop, despite the fact overall conditions are favorable. Concern was particularly noted for Poland, Hungary, France, and Germany, as those countries and parts of northern and western Europe remain dry. The attaché increased the EU-28 2019/20 production forecast to 64.5 MMT based on larger crops in Hungary and Romania, and cut its import forecast commensurately to 18.5 MMT.
U.S. cash prices are lower across the Midwest this week with the average price moving 4 percent lower to $154.25/MT. Barge CIF NOLA corn prices are lower this week with improving logistics along the Mississippi River keeping prices on the defensive. FOB Gulf values are 7 percent lower this week at $183.75/MT for August delivery as exporters work to keep U.S.-origin corn competitive on the world markets.

From a technical standpoint, December corn has broken out of its sideways trading range and below key moving-average support points. The market’s momentum is clearly downward, but futures are becoming oversold by some metrics. That combined with December corn’s Thursday trading that saw a move below $4.00 rebuffed by commercial buying that pushed the contract to close at $4.02 ½ may well create a move higher next week. Short profit taking and position squaring ahead of what could be a bullish August WASDE may offer near-term support. Moreover, the U.S. is still looking at smaller acreage and highly uncertain yields, which hardly seems a bearish combination.