Thirty representatives from 10 countries participated in the conference. 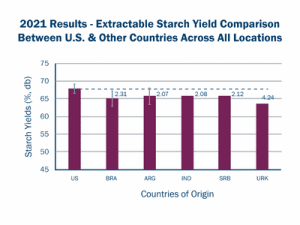 “The participants heard not only about the higher levels of extractible starch in U.S. corn, which translates directly into increased profitability, but they also learned the processing time for U.S. corn is half that of other origins, meaning plants are able to process potentially double the volume of U.S. corn versus other origins,” said Ramy Taieb, regional director for Europe, the Middle East and Africa.

“This translates into the potential to increase overall annual plant throughput. Finally, the consistency and uniformity of U.S. corn causes less operational disruption than other origins. All of these reasons overwhelmingly favor U.S. corn as the origin of preference.”

Dr. Vijay Singh, executive director, Integrated Bioprocessing Research Laboratory at the University of Illinois, Urbana-Champaign, conducted the study with the help of the Council. Over the past two years, corn samples from the U.S., Argentina, Brazil, Ukraine, Serbia, Indonesia and India were taken from warehouses of six industrial starch processors located in Asia, Latin America, India and the Mediterranean. The samples were shipped to the University of Illinois for analysis. Results showed U.S. corn yielded two to four percent higher extractible starch than other origins.

“The likely reason for these higher starch extractability levels in U.S. corn is due to the corn hybrids produced here, which affect the ‘mill-ability’ of the grain,” said Greg Krissek, CEO of the Kansas Corn Commission. “The starch is more readily available than the harder endosperm hybrids in South America.

“Typically, buyers focus on the broken corn and foreign materials (BCFM) levels in U.S. corn, but this study shows that even when you account for BCFM levels, it still outperforms other origins and actually increases the overall profitability of the plant. If processors want to optimize their plant’s performance, they need to be using U.S. corn.”

These results are applicable to any commercial starch plant which is buying their corn in the international market, not just the plants in the study.

“There are more than 50 industrial starch plants located outside the United States,” said Collin Watters, director of exports and logistics at the Illinois Corn Marketing Board. “Those that rely on corn imports to fill their needs should be choosing U.S. corn over other origins. If they aren’t, they are leaving money on the table and passing up an opportunity to improve their plant’s overall profitability.”

To put this into perspective, a wet milling plant with a capacity of 2,540 metric tons (MT) (100,000 bushels) of corn per day could expect roughly $6.5 million to $9 million a year in additional revenue if it were to use U.S. corn. This could increase further as the capacity of the plant could be expanded by the shorter processing time required for U.S. corn versus other origins.

“The Council appreciates the financial support and leadership provided by the Illinois Corn Marketing Board and the Kansas Corn Commission,” said Kurt Shultz, USGC senior director of global strategies. ”Their support made this study and the conference possible. The information presented certainly highlights the competitive advantage of buying U.S. corn and why it should be the origin of preference for any international starch plant.”