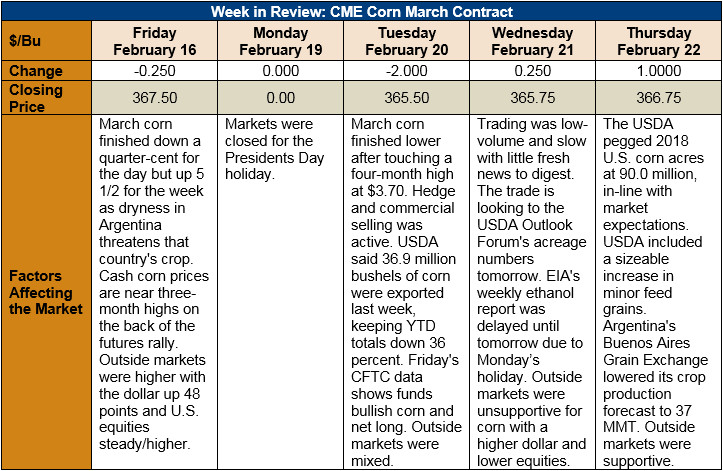 Outlook: USDA announced its forecast for 2018 U.S. corn acreage on Thursday: 90.0 million acres. The latest forecast is 200,000 acres less than the agency predicted in the February WASDE. The move, assuming USDA’s February WASDE yield projection of 176.6 bushels/acre, would imply a 33-million-bushel decrease in production, pushing production to 14.601 billion bushels.

Outside of the latest USDA planting figures, Argentina was the primary driver of the corn market this week. Even that effect was muted, however, as March corn futures traded a narrow range. The drought in Argentina is causing crop quality concerns along with doubts about the country’s production. On Thursday, the Buenos Aires Grain Exchange lowered its forecast for the country’s corn crop by 2 MMT to 37 MMT. If realized, that would be a 4 MMT reduction from the 206/17 crop.

The drought in Argentina contrasts with the excessively rainy Brazilian weather. The latter has delayed planting of the second corn crop, despite soybean harvest progressing nearly as normal. This, combined with the Argentine drought, could be sufficient to extend the corn market’s rally.

The U.S. Energy Information Agency said ethanol production increased last week to 1.068 million barrels per day as ethanol stocks fell by 100,000 barrels. Ethanol has been a bright spot for corn demand and, with ethanol margins pushing further into positive territory, it looks to continue this role.

U.S. corn exports remain slow heading into their traditional seasonal upswing. USDA’s Export Sales report is delayed until Friday, February 23 due to the February 19 President’s Day holiday in the U.S., but the Export Inspections report showed 36.9 million bushels were inspected last week. The weekly figure is below what was needed to keep pace with USDA’s projections. YTD exports are down 36 percent, but FOB NOLA corn remains among the most competitive origins available.

From a technical standpoint, March corn futures are still in an uptrend-supported rally. The 10-day moving average has become a key support point while resistance is found at $3.70. Funds have turned bullish corn and should provide near-term support. Cash prices are rising and basis narrowing, a further sign of strength in the market. But, with plenty of corn in bins around the U.S., gains will be met with resistance, first at $3.70 and then again at the 200-day moving average ($3.73 ½).