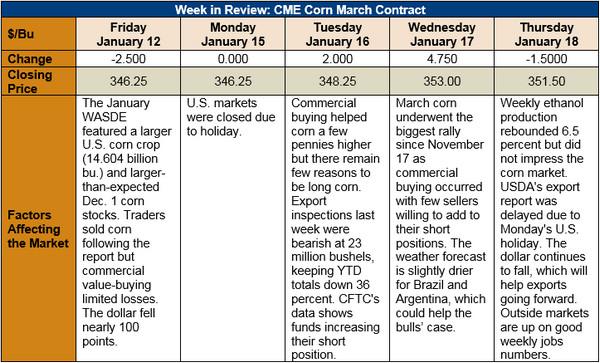 Outlook: Last Friday’s WASDE was certainly bearish the corn market. The USDA increased 2017/18 corn production by 26 million bushels to 14.604 billion. The additional production came on the back of a decrease in harvested area (from 83.1 million acres to 82.7) and a 1.1 bushel/acre increase in yield (from 175.4 to 176.5). Feed and residual use was decreased 25 million bushels and no other consumption variables were increased in the balance sheet. The combination of these factors increased ending stocks 40 million bushels (2 percent) to 2.477 billion.

While the WASDE was bearish the corn market, it held a more positive tone for the sorghum market. USDA increased its yield forecast 2 bushels/acre to 72.1 and added 5 million bushels to feed and residual use. Exports were left unchanged, however, but USDA increased the bottom end of its price range forecast to $2.85/bushel.

The USDA’s weekly export sales report will be issued tomorrow, but Monday’s Export Inspections report featured 584,000 MT of corn inspected for export, down from the prior week and putting YTD totals down 36 percent. The U.S. dollar has been falling sharply during the past week, however, and this may give U.S. exporters the competitive boost needed to ship more corn.

From a technical perspective, March corn futures are caught between heavily-short funds who see few bullish events in the world and value-buying commercials. Consequently, the contract has traded a narrow range right around $3.50, getting sold off when the price rises much above that point and with commercials supporting the market when it gets below. The trend is sideways until some fundamental factor shakes the market lose.

Right now, it’s difficult to tell what might move the market. The South American weather, with too much rain in Southern Brazil and too little in Argentina, is a possible bullish factor but its risks are already well priced into the market. NOAA’s long-term forecast today called for continued dryness in the Plains and a wetter-than-normal pattern in the eastern Midwest. The latter may develop into a delayed planting scenario, but it is far too early to call for this. The former may discourage planting/inhibit production, but again it is too early to tell. For now, March corn marches sideways while the world looks for some reason corn shouldn’t be priced at $3.50/bushel.