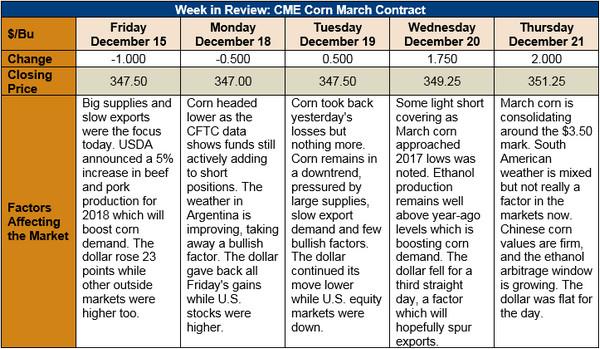 Outlook: March corn has been in a consolidation pattern around the $3.50 mark and today was no exception. The contract finished 2 cents higher and just above $3.51 as traders perceive such prices to be near the market’s fair value. Without much bullish or bearish news to push trading one way or another, trading activity continues to lighten ahead of the holidays. There is some position squaring ahead of the holidays with shorts seemingly always nervous about leaving their position on over the Christmas/New Year period.

U.S. export sales for the week were strong at 61.3 million bushels, but exports were only 27.6 million, leaving YTD shipment volumes down 36 percent. This week’s dynamic of sales exceeding the pace needed to meet USDA’s projections and shipments falling short of the same mark reflects the 2017/18 corn crop’s entire story so far. The U.S. export program has faced significant competition from South America; U.S. corn sales as a percent of USDA’s forecast have reached only 52 percent so far this year, versus 59 percent normally.

Despite the slowness in corn sales, U.S. sorghum exports are soaring. So far, the U.S. sold 17.2 million bushels this week, bringing the YTD totals to 158.4 million bushels. China has been the largest buyer of U.S. sorghum and their current purchase pace could bring U.S. stocks to very tight levels. USDA has already lowered its forecast of sorghum use for industrial and feed purposes given the export pace thus far.

From a technical perspective, March corn futures are range bound but with pre-holiday momentum building to the upside. Funds are still heavily short corn and will likely reduce their exposure heading into the new year. While the South American weather pattern remains mixed and generally non-threatening to the Argentine corn crop, the risk of a significant shift in the forecast over the holiday weekend will keep the mild short-covering rally going.