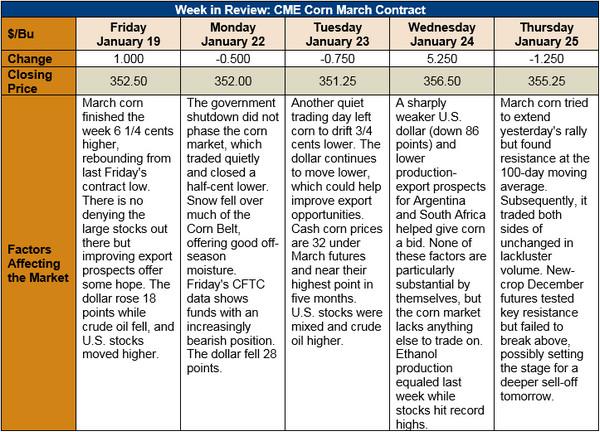 The USDA agricultural attaché to Argentina said Wednesday the country’s corn crop could fall to 40 MMT, a full 2 MMT below the WASDE’s official forecast. That news, combined with some from South Africa indicating the country may reduce export volumes this year, was enough to spark some mild short-covering in CBOT corn. Neither adjustment to the world corn balance sheet will end the over-supply situation, but with funds heavily short corn it was just enough to spark some buying interest.

The 2018 government shutdown only lasted one business day, but it was enough to delay the USDA’s Export Sales report until Friday. Traders’ expectations are for 0.9-1.25 MMT of old-crop corn to be counted as sold in this week’s reports. This week’s export inspections report featured 668,000 MT of corn exported along with 220 MT of sorghum. Exports for both crops are below last year’s volume but 36 percent and 25 percent, respectively. Exporters are hopeful the dollar’s recent fall will further enhance U.S. export potential.

From a technical perspective, March corn has been turned back by its 100-day moving average and, without much fundamental news out there, will likely trade lower. Additional selling pressure may come from the fact the new-crop December contract briefly broke above its 100-day moving average but could not sustain a close above this point. This will likely set the stage for lower price action in the near-term.