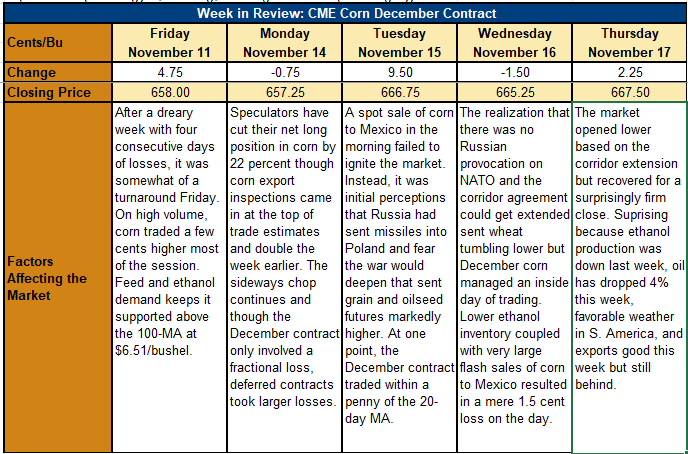 Outlook: Following the recent pattern of choppy, sideways trading, over the past five days the December corn futures contract had three up days and just two that traded downward. The result is a contract that is up by 14.25 cents (2.1 percent) since the last report. This is impressive considering the number of headwinds: petroleum is down, the Black Sea shipping corridor was extended for 120 days, ethanol output dropped, weather has improved in South America, etc. But it obviously is not all bleak – see below.

Speculative long positions in corn were trimmed last week by 22 percent to 153,241 contracts. It is unclear whether this week’s net gain in value will alter that perspective or not. CFTC’s Commitment of Traders report tomorrow will show whether the market remains risk off or has regained confidence in market direction.

As of Sunday, USDA’s Crop Progress report indicates the U.S. corn crop is 93 percent harvested, which is above both last year’s pace and the 5-year average. The Midwest is cold and dry, which should enable progress toward bringing this harvest to an end.

The Energy Information Agency reported ethanol production last week was 1.011 million barrels/day, which was down 3.8 percent from a week earlier but the fifth week in a row of over one million barrels. Importantly, the agency lowered its estimate of the ethanol inventory by 4 percent, indicating continued strong demand. The agency’s Short-Term Energy Outlook (STEO) increased forecasted ethanol demand by 0.6 percent to 911,000 barrels per day for 2022, and the U.S. generated 1.24 billion ethanol blending credits in October, up nearly 10 percent from September.

This week the International Grains Council reduced its already low estimate for 2022/23 global corn carryover stocks by another 0.4 percent to 257 MMT, the lowest level since 2013/14.