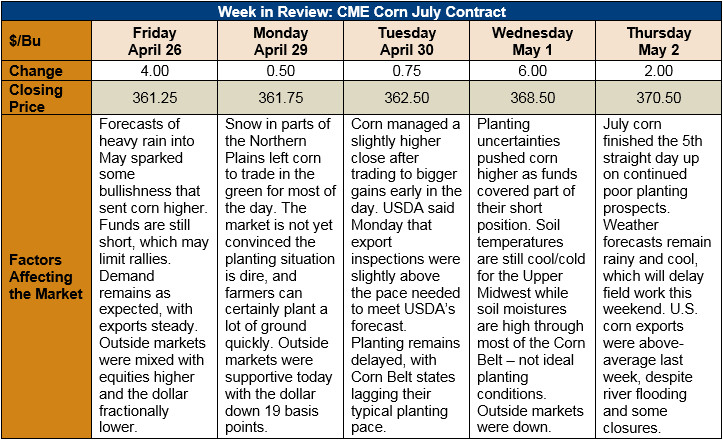 Outlook: July corn futures are 10.75 cents (3.1 percent) higher than last Thursday’s close as planting delays and weather outlooks across the corn belt are sparking some supply concerns. Demand for U.S. corn remains steady and favorable, but most of the market’s attention is on 2019 supply expectations.

On Monday, USDA reported that 15 percent of the U.S. corn crop is planted, down from the five-year average pace of 27 percent. The 6- to 10-day weather outlook is calling for below-normal temperatures across the Midwest with above-normal rainfall through the Southern Plains and eastern Corn Belt. The weather forecast is hardly favorable to fieldwork and will likely further exacerbate the slow start to the 2019 planting season.

If the planting delays become too severe, there is likely to be some acreage switched from corn to soybeans, or other crops. However, there are also reports that spring wheat acreage will be lower this year, and that farmers in that area are likely to plant corn instead. The new crop soybean/corn futures ratio is falling steadily, hitting 2.24 at today’s close, which should offer economic incentives for farmers to retain corn acres. At this juncture, however, it is still too early to determine what the final crop acreage mix will be.

USDA’s weekly Export Sales report featured net sales of 587 KMT and weekly exports of 1.37 MMT. The export figure was up 9 percent from the prior week, keeping YTD exports up 13 percent. YTD bookings are down 10 percent, slightly below USDA’s anticipated yearly decrease in exports of 6 percent. Other highlights include 15.1 KMT of sorghum exports and 300 MT of barley exports. Barley exports are up 53 percent YTD.

U.S. cash corn prices are higher this week as FOB Gulf values moved upward on logistics constraints. The average U.S. price reached $3.42/bushel this week, up 3 percent from the prior week but down 8 percent from this time last year.

From a technical standpoint, July corn is starting to get interesting. After making several new contract lows, the market posted a significant reversal and has since moved nearly 20 cents higher from its latest contract low. Funds, which are heavily short corn and other ag commodities, have covered some of their position, though not at an aggressive pace as the planting delays continue. July corn is likely making the season switch to trading like a “weather market”, which could mean heightened volatility and a general upward trajectory. Though this has been said several times about the 2018/19 corn crop, it looks like seasonal lows have been made and the near-term outlook is for higher prices.