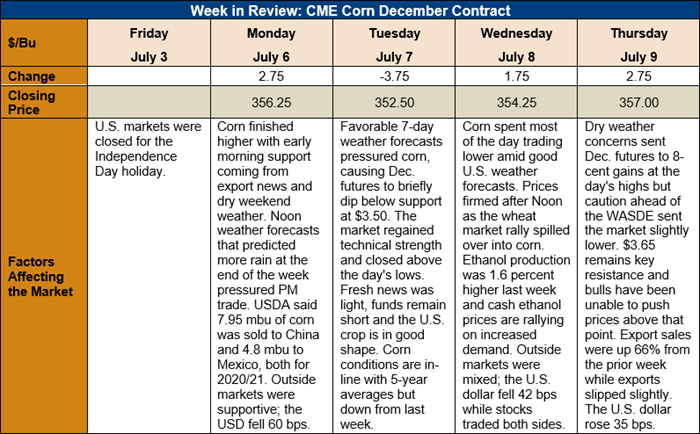 Outlook: December corn futures are 3 ½ cents (1.0 percent) higher this week as profit taking and continued short covering left the market trading mostly sideways. Traders are assessing the U.S. supply outlook amid favorable weather for the Midwest while adjusting positions ahead of Friday’s July WASDE report. Funds still hold a large net short position in corn and have been reluctant to exit that position amid the outlook for ample global supplies.

Mildly hot/dry conditions across the Midwest over the Fourth of July weekend lowered corn condition ratings slightly. The USDA’s latest estimate noted 71 percent of the corn crop is rated good/excellent condition, down 2 percent from the prior week. The crop is in average or better condition for most of the key producing regions as pollination begins. Sorghum and barley good/excellent ratings increased 3 and 4 percent, respectively, as timely rains boosted crop conditions.

The weekly Export Sales report featured net corn sales of 599,000 MT and exports of 1.084 MMT. The net sales figure was up 66 percent from the prior week while exports fell 25 percent. Recent shipments put YTD exports at 34.9 MMT (down 21 percent) while YTD bookings (exports plus unshipped sales) stand at 42.9 MMT (down 13 percent). The report also featured 51,000 MT of sorghum exports. YTD sorghum exports are up 160 percent as international demand, particularly from Asia, has remained exceptionally strong.

From a technical standpoint, December corn futures spent most of this week working back from recent highs and re-testing support at the 100-day moving average and $3.47. The market consistently found such support, which helped push prices higher Wednesday and Thursday. The wheat market rally also created spillover buying and broad firmness in the grain markets. December futures have stalled at $3.65 over the past week, making that point a key resistance level for bears. If the market can push above resistance there, it opens up the possibility of a test of the 200-day moving average/psychological resistance at $3.75. The market has confirmed major support at $3.47 and sideways/higher trade is expected, barring any surprises from the July WASDE report.