CHICAGO BOARD OF TRADE MARKET NEWS 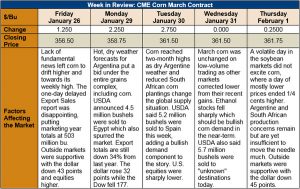 Outlook: March corn gained 5 ¼ cents this week in what, for the current environment, amounts to a sizeable rally. The market found its way higher this week, fueled by dry weather in Argentina, production cuts around the world, and spillover buying from other markets. The fundamentals are hardly bullish yet, but modest production cuts may lift the market from its recent malaise.

Argentina’s weather forecast remains hot and dry for the next 10 days, as it has been for weeks now. The situation is more concerning for the country’s soybean crop, but it can hardly be ignored for corn. The USDA recently made a 2 MMT downward revision to Argentina’s corn production this year due to the drought. Elsewhere, drought in South Africa has cut the country’s corn planting expectations, further moderating world supply expectations. These changes are not enough to create a bull market but will likely keep corn trading at a premium to its recent ranges.

USDA’s export sales report this morning featured better-than-expected sales for corn (72.9 million bushels) but export volumes that were lower than needed. YTD exports are down 30 percent from last year at 543 million bushels and have only reached 28 percent of USDA’s annual forecast, versus an average of 33 percent for this time of year. U.S. exporters have some ground to cover if USDA’s forecast will be met, but the falling U.S. dollar and the fact that FOB NOLA corn is the cheapest in the world right now could buoy exports.

From a technical perspective, March corn made the important move above the 100-day moving average and has since found strong support at this point. The market faces resistance at $3.62 and has been unable to trade much above this point. Momentum indicators are pointing higher, though some are beginning to indicate an overbought market. Fund short-covering has been active this week and further deterioration in world crops could extend this buying. The next upside targets are $3.70 and $3.75 while strong support lies at the 100-day moving average.