Mycotoxins are toxic compounds produced by fungi that occur naturally in grains. When consumed at elevated levels, mycotoxins may cause sickness in humans and animals. While several mycotoxins have been found in corn, aflatoxin and DON are considered to be two of the most common mycotoxins.

As in the previous Harvest Reports, a subset of the 2018 harvest samples were tested for aflatoxin and DON for this year’s report. Since the production of mycotoxins is heavily influenced by growing conditions, the objective of the Harvest Report is strictly to report on instances when aflatoxin or DON are detected in the corn crop at harvest.

The Harvest Report review of mycotoxins is not intended to predict the presence or level at which mycotoxins might appear in U.S. corn exports. Due to the multiple stages of the U.S. grain merchandising channel and the laws and regulations guiding the industry, the levels at which mycotoxins appear in corn exports are less than what might first appear in the corn as it comes out of the field. In addition, this report is not meant to imply that this assessment will capture all the instances of mycotoxins across the 12 states or three ECAs surveyed.

1. Assessing the Presence of Aflatoxins and DON

At least 25% of the minimum number of targeted samples (600) were tested to assess the impact of the 2018 growing conditions on total aflatoxin and DON development in the U.S. corn crop. The sampling criteria, described in the “Survey and Statistical Analysis Methods” section, resulted in a total number of 181 samples tested for mycotoxins.

A threshold established by the USDA FGIS as the “Lower Conformance Level” (LCL) was used to determine if a detectable level of the mycotoxin appeared in the sample. The LCLs for the FGIS-approved analytical kits and used for this 2018/2019 report were 5.0 ppb for aflatoxin and 0.5 ppm for DON. The FGIS LCL was higher than the Limit of Detection (LOD) specified by the kit manufacturer of 2.7 ppb and 0.1 ppm for aflatoxin and DON, respectively. Details on the testing methodology employed in this study for the mycotoxins are in the “Testing Analysis Methods” section.

The fact that the 2018 crop season percentage (98.9%) of samples below the FGIS LCL of 5.0 ppb was similar to 2017 and 2016 (both 98%) may be due, in part, to favorable weather conditions in 2018 (see the “Crop and Weather Conditions” section for more information on 2018 growing conditions). Most of the growing area received ample moisture during pollination and grain-fill in 2018, and as a result, the corn plants were not under stress. 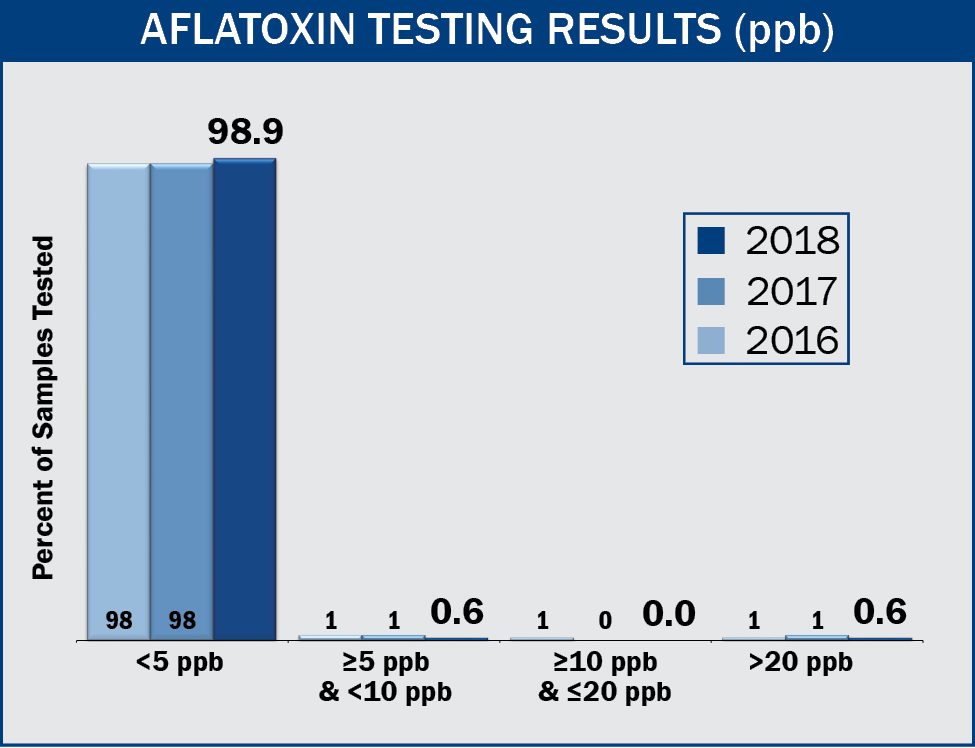 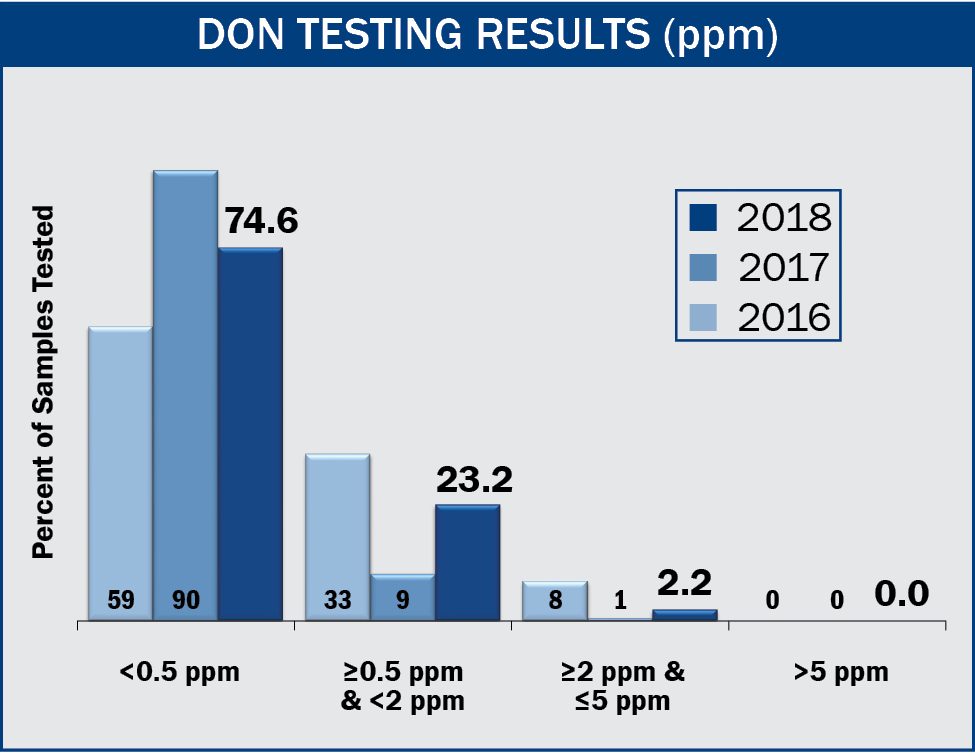 The levels at which fungi produce mycotoxins are impacted by the fungus type and the environmental conditions under which the corn is produced and stored. Because of these differences, mycotoxin production varies across the U.S. corn-producing areas and across years. In some years, the growing conditions across the corn-producing regions might not produce elevated levels of any mycotoxins. In other years, the environmental conditions in a particular area might be conducive to the production of a particular mycotoxin to levels that impact the corn’s use for human and livestock consumption. Humans and livestock are sensitive to mycotoxins at varying levels. As a result, the FDA has issued action levels for aflatoxin and advisory levels for DON by intended use.

Action levels specify precise limits of contamination above which the agency is prepared to take regulatory action. Action levels are a signal to the industry that the FDA believes it has scientific data to support regulatory and/or court action if a toxin or contaminant is present at levels exceeding the action level if the agency chooses to do so. If imports or domestic feed supplements are analyzed in accordance with valid methods and found to exceed applicable action levels, they are considered adulterated and may be seized and removed from interstate commerce by the FDA.

Advisory levels provide guidance to the industry concerning levels of a substance present in food or feed that are believed by the agency to provide an adequate margin of safety to protect human and animal health. While the FDA reserves the right to take regulatory enforcement action, enforcement is not the fundamental purpose of an advisory level.

The most important type of mycotoxin associated with corn is aflatoxin. There are several types of aflatoxin produced by different species of Aspergillus, with the most prominent species being A. flavus. The growth of the fungus and aflatoxin contamination of grain can occur in the field prior to harvest or in storage. However, contamination prior to harvest is considered to cause most of the problems associated with aflatoxin. A. flavus grows well in hot, dry environmental conditions or where drought occurs over an extended period of time. It can be a serious problem in the southern United States, where hot and dry conditions are more common. The fungus usually attacks only a few kernels on the ear and often penetrates kernels through wounds produced by insects. Under drought conditions, it also grows down silks into individual kernels.

There are four types of aflatoxin naturally found in foods – aflatoxins B1, B2, G1 and G2. These four aflatoxins are commonly referred to as “aflatoxin” or “total aflatoxin.” Aflatoxin B1 is the most commonly found aflatoxin in food and feed and is also the most toxic. Research has shown that B1 is a potent, naturally-occurring carcinogen in animals with a strong link to human cancer incidence. Additionally, dairy cattle will metabolize B1 to a different form of aflatoxin called aflatoxin M1, which may accumulate in milk.

Aflatoxin expresses toxicity in humans and animals primarily by attacking the liver. The toxicity can occur from short-term consumption of very high doses of aflatoxin-contaminated grain or long-term ingestion of low levels of aflatoxin, possibly resulting in death for poultry, the most sensitive of the animal species. Livestock may experience reduced feed efficiency or reproduction, and both human and animal immune systems may be suppressed as a result of ingesting aflatoxin.

The FDA has established action levels for aflatoxin M1 in milk intended for human consumption and aflatoxin in human food, grain and livestock feed in parts per billion (ppb). The FDA has established additional policies and legal provisions concerning the blending of corn with levels of aflatoxin exceeding these threshold levels. In general, the FDA currently does not permit corn blended to reduce the aflatoxin content to be sold in general commerce.
Corn exported from the United States must be tested for aflatoxin according to federal law. Unless the contract exempts this requirement, testing must be conducted by FGIS. Corn above the FDA action level of 20.0 ppb cannot be exported unless other strict conditions are met. This results in relatively low levels of aflatoxin in exported grain.

DON is another mycotoxin of concern to some importers of corn. It is produced by certain species of Fusarium, the most important of which is Fusarium graminearum (Gibberellazeae) which also causes Gibberella ear rot (or red ear rot). Gibberellazeae can develop when cool or moderate temperatures and wet weather occur at flowering. The fungus grows down the silks into the ear, and in addition to producing DON, it produces conspicuous red discoloration of kernels on the ear. The fungus can also continue to grow and rot ears when corn is left standing in the field. Mycotoxin contamination of corn caused by Gibberellazeae is often associated with excessive postponement of harvest and/or storage of high-moisture corn.

DON is mostly a concern with monogastric animals, where it may cause irritation of the mouth and throat. As a result, the animals may eventually refuse to eat the DON-contaminated corn and may have low weight gain, diarrhea, lethargy and intestinal hemorrhaging. It may cause suppression of the immune system, resulting in susceptibility to a number of infectious diseases.

FGIS is not required to test for DON on corn bound for export markets but will perform either a qualitative or quantitative test for DON at the buyer’s request.